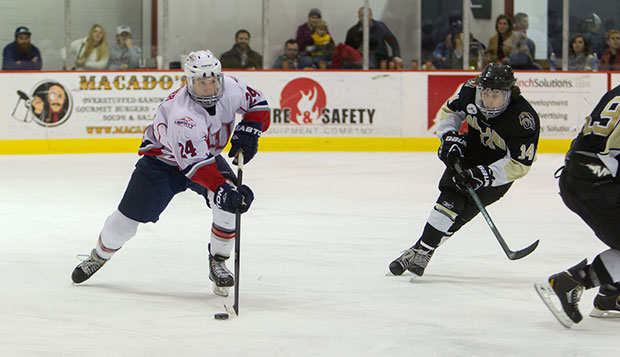 Senior forward Rick Turner maneuvers the puck against Oakland last Friday night at the LaHaye Ice Center. Turner and the rest of the Flames will be on hand at LaHaye on Wednesday night to see where they are seeded for the March 1-6 ACHA Division I national tournament in Chicago.

March Madness will arrive a month early for fans of Liberty University's Division I men's hockey team and other American Collegiate Hockey Association DI programs around the country.

On Wednesday at 9:45 p.m., the announcement of the season's 17th and final ACHA Men's DI national poll will be broadcast live from Liberty University's LaHaye Ice Center through streaming web TV. This will be the first time the ACHA has held a selection show.

The top 20 teams, including six automatic bids, qualify for the March 1-6 national championship tournament at The Edge Ice Arena near Chicago. The seedings, brackets, and tournament schedule will bedisclosed at this time.

"That's real exciting," Liberty head coach Kirk Handy said. "We're very, very privileged to have Liberty University's School of Communication so involved in what we do and it makes such a big difference.It'll create a lot of buzz, a lot of excitement."

Members of the Flames' team will be on the ice to watch the show as Liberty's Club Sports student broadcast staff provides all of the on-site production work, staying in close contact with the ACHA for up-to-the-minute rankings updates and tournament bracket information.

Rett McGibbon, a Club Sports broadcaster who covers both the Flames' hockey and lacrosse programs, will host the live rankings and tournament bracket reveal show.

The show will offer additional commentary and special interview segments with coaches and players from teams across the country as each portion of the tournament bracket is unveiled.

"This is a very exciting addition to our usual process of releasing rankings and the National Tournament berths," ACHA Public Relations Director Chris Ostrander said in a statement on the league's website. "Adding a live broadcast of the event will hopefully add the feel of March Madness for those programs who have earned a ticket to Chicago."

Followers of the webcast are encouraged to offer feedback and ask questions by logging in to their Twitter or Facebook accounts and submitting tweets or posts before and during the show using the hashtag #ACHAChicago2013.

The Flames came in at No. 10 for the sixth consecutive time in Friday's 16th poll but could slip out of that spot after being swept by No. 12 Oakland over the weekend at home.

In the past 10 seasons, eight different schools have won the ACHA DI national tournament, twice each by Lindenwood, now an NCAA Division I team, and Illinois.

Penn State claimed an ACHA DI record five titles before moving up to the NCAA Division I level last year.