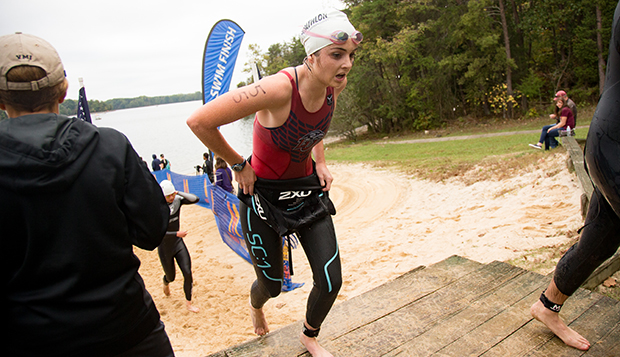 After graduating a large group of seniors following her first season at the helm, Liberty University triathlon Head Coach Heather Gollnick is looking to use the team's recent success as a springboard.

"I came into a really strong group of athletes who were really dedicated," Gollnick said. "Triathlon takes a lot of time (because) you're training three sports — swimming, biking, and running."

Gollnick is a five-time Ironman champion and USAT-certified triathlon coach and Level III cycling coach. Though she has won more than 200 multi-sport races in her career and trained more than 100 Ironman finishers in 20 years, she is new to the collegiate recruiting process. In the offseason, she has gotten creative using social media to find potential student-athletes to build up the program.

"We have a handful of athletes coming in and a lot of them have already been under my direction for the whole summer," Gollnick said. "They log in and tell me how their workouts are going, so I'm excited to see them in person."

She is hoping to attract more potential triathletes to tryouts later this month before the Flames and Lady Flames make their 2019-20 season debut at the Patriot Triathlon Festival, Sept. 7 in Williamsburg, Va.

Returning seniors Heather Ziebart and Laci Clark will both serve as women's team captains while rising sophomore Max Galbraith, who placed 75th individually and helped the Flames to a sixth-place team standing at the USA Triathlon Collegiate National Championships in Tempe, Ariz., is the men's team's top returner. Galbraith recently won an XTerra Duathlon in Maryland.

"I'm looking forward to seeing how they do," Gollnick said. "Heather had a rough season last year. She had a bike accident and she has been coming back really strong from it and is as dedicated as ever."

Ziebart paced the Lady Flames to a 16th-place team performance at nationals with a 15th-place showing in the Draft-Legal Sprint and 31st-place finish in the Olympic-Distance race. She returned to training over the summer in preparation to compete in the Olympic-Distance race at the USA Triathlon Age-Group National Championships set for next Saturday, Aug. 10, in Cleveland.

"Heather is one of the most dedicated and driven athletes I have worked with," Gollnick said. "She continues to persevere and push herself to reach her goals."

Ziebart will be joined in Cleveland by former teammate and recent graduate Shannon Wade, who will compete in Sunday's Draft-Legal Sprint.