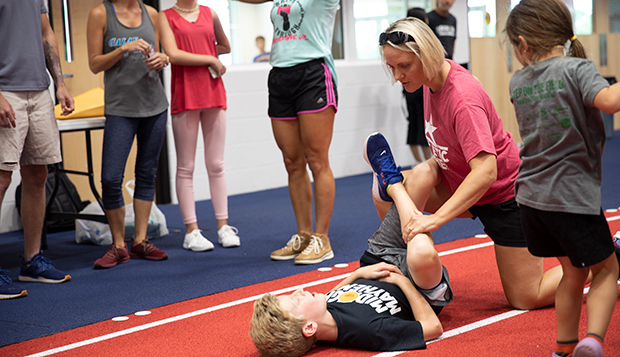 Liberty University's Club Sports department is taking a lead role in working with Virginia Amateur Sports and the City of Lynchburg to help host this week's State Games of America, the biennial Olympic-style event being staged in Virginia for the first time.

"It's a wonderful opportunity for potential student-athletes from all over the United States to see the facilities Liberty has to offer, and to come and compete in sports coached by our actual coaches," said Kaycee Tripp, Club Sports Director of Recruiting & Special Events. "It can be a good recruiting opportunity for those coaches as well since these kids or athletes may want to come to Liberty one day."

The event is expected to attract 14,000 competitors who are medal winners from their state's events;  There are currently 30 states conducting or organizing statewide sports festivals known as State Games.

A total of 50 Club Sports staff are involved in providing support from Monday to Sunday, July 29-Aug. 4, at various locations around campus and throughout Lynchburg. That includes 16 head and assistant coaches from Club Sports who will serve as directors for 13 of the more than 40 sports offered. Club Sports Assistant Athletic Director for Sports Medicine Angie Witt is serving as the medical coordinator.

"All of our full-time staff, graduate students, student workers, and some of our temporary workers will be helping out that weekend," said Tripp, who has worked for the past year to prepare for the games, along with graduate assistant C.J. Tipping, a forward and captain on Liberty's ACHA Division I women's hockey team. "She has been my right hand in handling all of the logistics and we work hand-in-hand with (State Games of America Games Director) Amanda Mangum and (Liberty's Executive Director of University Events) Mitria Vaughter to coordinate these games and make sure the sports run successfully."

The State Games are being held in conjunction with the Commonwealth Games (Virginia's amateur sports festival), which Liberty has hosted for the past three summers since becoming the title sponsor in 2015.

"We have used the Commonwealth Games as a test run for what's coming, the State Games of America," Vaughter said.

Each sport will have its own check-in welcome process at its respective venue, with Club Sports staff assisting with setup and making sure the coaches have everything they need to run the event.

The LaHaye Ice Center, along with the Lancerlot Sports Complex in Vinton, Va., will be especially busy hosting the figure skating competition from Wednesday through Sunday, with 722 registered participants creating the largest pool of competitors at the State Games.

"It is a very large ordeal to organize, that is for sure," said synchronized skating Head Coach Tatiana Payne, who will direct the U.S. Figure Skating (USFS) sanctioned competition at LaHaye with help from Assistant Coach Emily Hughes. "I am looking forward to having people from all over the country see what a great rink facility we have at Liberty."

Payne said the competition will feature a wide range of skaters, including youth enrolled in Learn to Skate and Compete USA programs, U.S. Figure Skating novices to seniors, and adults of all skill levels.

The USFS will fly in 28 judges from all over the country with additional judges available for the ISI event.

"Kaycee has done an excellent job in juggling all the sports and in coordinating everything and everyone in our department," she said. "This is a very large event, and it is exciting that it is taking place here in Lynchburg."