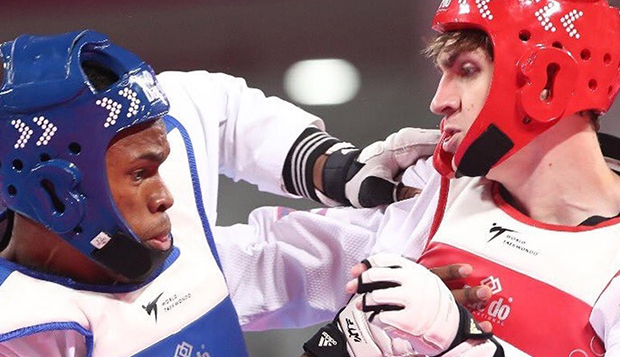 Jonathan Healy, a Liberty University alumnus who experienced tremendous success on LU's men's taekwondo team, is now an ambassador for the Flames as he competes around the world, including this week at the Pan Am Games in Lima, Peru.

Healy, who is 6-feet, 6-inches tall and weighs 225 pounds, managed to counter Alba's spinning moves with kicks to the torso.

"The plan was to control the distance, manage it really well, and find my points where I could," he said in a story posted on the Team USA website. "I played to my strengths, pressured him, and kept my guard up the entire time."

His triumph helped the United States clinch first place in the Pan Am Games taekowndo medal count, with nine total (four gold, one silver, four bronze) to seven each for Mexico and Brazil,

It has been a breakthrough year for Healy on the world stage. Earlier this year, he defeated Team USA member Stephen Lambdin — who had beaten Healy at the 2016 Olympic Trials in Colorado Springs, Colo., to advance to the Summer Games in Rio De Janeiro — for the first time in 10 matches.

Healy moved into the No. 1 ranking among U.S. competitors in his category after that victory. The ranking is a factor in determining who competes at the 2020 Olympic Trials in Colorado Springs for the chance to represent Team USA at the 2020 Summer Olympics in Tokyo.

"Being able to represent your country in the Olympics is the pinnacle in the sport, though Japan is the birthplace of karate, not taekwondo," Liberty taekwondo Head Coach Tom Childress said.

At Liberty, Healy won back-to-back National Collegiate Taekwondo Association (NCTA) black belt championships as a freshman and junior in Liberty's online program and represented the Flames at the World University Games in South Korea, the birthplace of taekwondo, in July 2015.

Since he graduated, Healy has addressed Liberty's team via Skype to offer updates on his progress and encouragement in their pursuit of national titles.

"He is very motivated and really focused on what he's doing," Childress said. "It is great to have an alumnus of that caliber who's out there looking for an Olympic berth and to go on to be a world champion in the sport. Knowing that he was part of the team, and with his wonderful résumé as a national collegiate champion, he has shown that with the right drive and training, anything's possible."