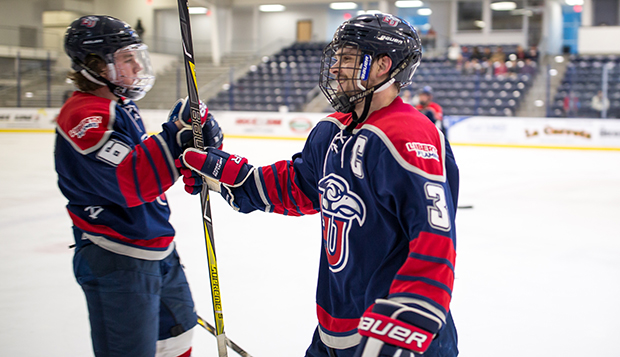 Jared Smith experienced a smooth transition shifting from Assistant Coach to Head Coach of Liberty University's ACHA Division III men's hockey team last year, starting on a nine-game winning streak and finishing 15-5-3. He is looking forward to leading the program to the next level in his second season at the helm, with the Sept. 28-29 season-opening series against Coastal Carolina at the LaHaye Ice Center now just over two months away.

"As a coach, you just want to move forward every year," Smith said. "The whole program's growing and the past two to three years, you can really see the recruiting taking place and at tryouts … it sounds like we're going to have another big, talented group of players coming in."

After being edged by Coastal Carolina, 4-3 in the final of the East Coast Collegiate Hockey League (ECCHL) tournament Feb. 10 at home, and by third-seeded Tampa, 3-2 in overtime of the South Region tournament final on March 10 in Huntsville, Ala., the Flames are eager to get back onto the ice.

"It is a goal for this season to take home that championship because we were so close last year, it just makes you want it more," Smith said. "Our goal is definitely to make it to nationals and with the talent pool that we have coming in, it's very exciting."

"It will be all the same teams, the same rivalries, the same competitive edge that we had (in the ECCHL)," Smith said.