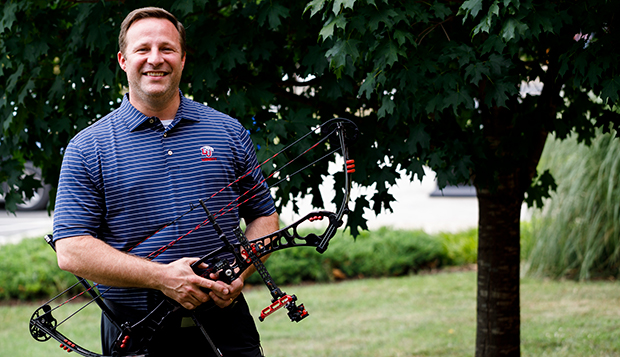 Ben Summers ('97), vice president of manufacturing and production at TRU Ball/AXCEL Archery in nearby Madison Heights, was introduced this week as head coach of Liberty University's men's and women's archery teams.

Summers is a Level 3 National Training System (NTS) coach who has SafeSport and Mental Management training in the USA Archery system of Olympic recurve and compound bow technique. He interacts on a daily basis with Olympians and world champion shooters in compound archery. A world traveler as a representative for his company, Summers visited the Netherlands last month for the 2019 World Archery Championships, a qualifier for the 2020 Summer Olympics in Tokyo.

TRU Ball manufactures archery releases, or triggers, and AXCEL sights and scopes that are marketed around the world and were used by three-fourths of the men's archery medal-winners at the 2016 Summer Olympics in Rio. The company, a family business founded by his father, Greg Summers, was featured on an episode of Game On last year.

The Flames and Lady Flames have practiced out of TRU Ball's indoor archery shooting range in recent seasons in preparation for competition at the USA Archery Indoor National Championships.

"I want to make it fun for everyone and to build a program at Liberty University that is an example of what a college archery program should be," Summers said. "I see it as a great way to recruit for the university, but also a way for the team members to connect with the university."

Summers has also served for the past 15 years on the board of the Archery Trade Association (ATA) and has been chairman for the last four years. The ATA unites over 600 archery manufacturers and representatives, 1,200 archery retailers and distributors, and millions of archery shooters worldwide.

"I am extremely excited to be the personal connection as a world-class coach to student-athletes," said Summers, who holds a degree in pastoral ministries from LU. "This sport has given so much to me and my family, and I want to build these young people into successful leaders who will be able to excel in whatever opportunities they have in life. I also want to make sure they compete with integrity … so that when they are in the real world, they can be the salt and the light that God wants them to be."

As an undergraduate student, Summers developed close friendships with two classmates who helped start Liberty's archery program — Dr. Gabriel Etzel, who now serves as administrative dean of the Rawlings School of Divinity, and Dr. Jonathan Gukgeuzian, chair of its Department of Christian Leadership and Church Ministries.

Summers' family also has many close connections to Liberty and its archery program. His brother, fellow TRU Ball/AXCEL Vice President Brian Summers ('00), graduated from the School of Business. His sister, Kelly, is another TRU Ball vice president and is married to Liberty's first archery coach, Brandon Reyes, now TRU Ball's director of marketing.

Summers' wife, Jane, studied business management at Liberty and received her master's in elementary education last spring. She taught preschool for the past eight years at Liberty Christian Academy. The Summers have four children: Madelyn, 11; Grant, 13; Savannah, 15; and Lindsay, 18, who will be a freshman nursing student at Liberty this fall. A former archer at LCA, Lindsay will participate in the National Archery in the Schools Program (NASP) Open Championship in Nashville on July 26.

Summers replaces Ian Rigney, the Flames' most decorated archer with 10 national titles as a competitor and coach. (Rigney will still direct the Aug. 3-4 3D archery competition for the State Games of America at Liberty's range that opened last summer).