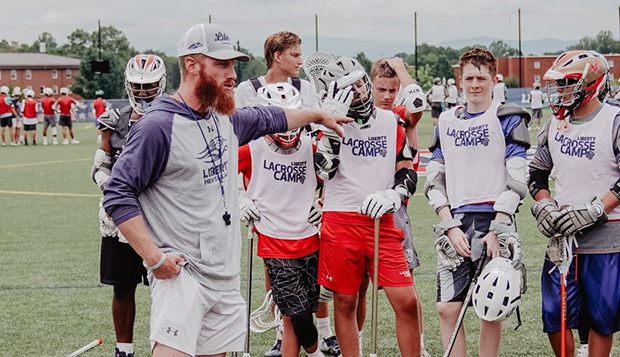 A record 97 participants in this week's sixth annual Liberty University Men's Lacrosse Camp are getting a behind-the-scenes peek at the Flames' thriving program and a firsthand glance at the university and its many amenities.

Head Coach Kyle McQuillan, who guided Liberty to a No. 5 final ranking this past spring after its first undefeated regular season and second MCLA Division I National Championship appearance, said the camp's goals include acclimating potential students to campus life, as well as raising the level of their games.

"Our hope is that we can give them one or two things that they can take away to implement in their game which make them instantly a little bit better, a little bit smarter, a little bit wiser," he said. "Ultimately, the biggest thing is just to have a good experience, to have fun … being a part of the Liberty Lacrosse program and Liberty University."

Campers have come from throughout the Southeast and as far away as Arizona, Ohio, Florida, Michigan, and Texas.

"I saw some of these kids last year, so it's cool seeing them again," said recent graduate and camp counselor Sam Gregory. "I enjoy it. It's a good mix of lacrosse and fun activities, which the campers love. The best thing about it is hanging out with your friends. The end goal is just to get players better and have as good a time as they can working on the fundamentals and then translate that to full-field and more game situations."

Camp activities include playing football at the Indoor Football Practice Facility, basketball and swimming at the LaHaye Recreation & Fitness Center, tubing at the Liberty Mountain Snowflex Centre, and paintball on the two East Campus fields.

"They eat in the dining hall and sleep in an East Campus dormitory, so they're pretty much fully-immersed students for about a week, which is great, and it's a testament to the university," McQuillan said. "We run a great camp, but we would be very limited if we didn't have the tremendous resources that the university provides to us."

Two incoming freshmen recruits, goalie John Pryor and attack Mark Rolewicz, are among the crowd of campers. A few others are planning to walk on at tryouts in August and are using the camp as an opportunity to showcase their skills to the Flames' coaching staff and current team members.

"It's fun seeing all the guys I'll be playing with and meeting some of the new ones, building that chemistry early," Pryor said. "I'm getting good looks and reps and I'm playing underneath (rising senior goalie Ryan Reynolds), so it's great to be working with him at the same time."

In return, coaches and counselors have opportunities to share their testimonies and faith journeys with the campers at morning devotions. Assistant Coach Mike Zumpano addressed the crowd on Monday before McQuillan followed on Tuesday and Gregory and fellow recent graduate Chase Wright spoke on Wednesday and Thursday, respectively.

Additionally, Club Sports Ministry Director Brian Davidson is leading a daily series titled, "Your God Moment," studying how God transformed the life of Paul and discussing how He can shape the players' lives and guide their futures.

"It's a good way to start the day and a good conversation and opportunity to create some fellowship," McQuillan said.

Players will compete in intrasquad contests and scrimmages against counselors on Thursday before the camp concludes on Friday after skills competitions at the Liberty Lacrosse Fields.