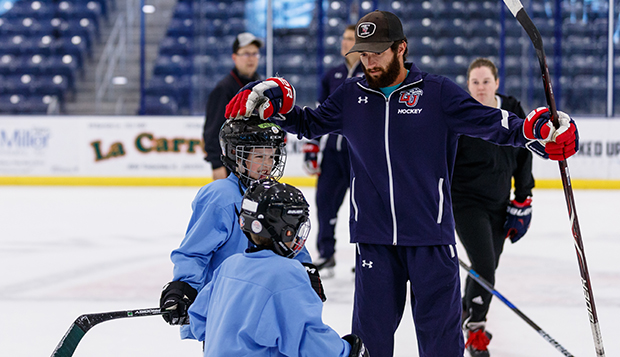 Josh Hamilton works with two of the 6-9-year-old Squirts and Mites players during Wednesday afternoon's on-ice session at the LaHaye Ice Center. (Photos by KJ Jugar)

The rising senior forward and team captain for the ACHA Division I men's hockey team got a jump start in the program as a young teenager at Liberty's summer hockey camps, which opened this week and run through mid-July at the LaHaye Ice Center.

"I loved these camps growing up, and I'm just happy to be a part of them as a counselor now," Hamilton said before taking the ice to work with the 6-12-year old Squirts, Mites, and Pee Wees in Tuesday afternoon's session. "I like working with them all, but these kids are so fun and it's always a good time to get out on the ice with them."

Hamilton is taking a three-week break from his summer landscaping job to serve for a third year as a camp counselor. In July, he'll be counseling 13-16-year-old Bantams, as well as the U16, U18, and Juniors players for a new Hockey ID Camp. All three camps are near capacity with 80 attending this week and close to 100 registered for the following sessions.

Just like the Club Sports team he plays on now, Hamilton, a business project management major, said the camps take a holistic approach to training — physically, academically, spiritually, and socially.

"That's why we're here, to help them grow in their game and grow in their faith," Hamilton said. "The fundamentals are vital to learn at this age because it only enhances with time growing up. Spiritually, I remember being a camper and looking up to the counselors so much."

"I just admired their walk with the Lord and their on-ice skill, and now, I just want to do the best that I can to be a good role model for these kids," Hamilton said.

"Chapel time is probably my favorite part of the camp," Hamilton said. "I hope they just see Christ in each of the counselors, even before the hockey. Hockey is important, but ultimately, they are to grow in Christ, and hopefully we are able to point them in that direction."

Hamilton grew up playing youth hockey in Greensboro, N.C. He played two seasons of Juniors hockey in Alabama before joining the Flames in Fall 2016, under the direction of DI Head Coach Kirk Handy, who remembered the eager and talented young camper from previous summers.

"I got to know Kirk and Jeff by coming to camps as a kid; that's how I got on their radar," Hamilton said. "I wanted to come to Liberty and called them and it all worked out."

Former ACHA DI and DII women's hockey forward Catharine (Burrell) Kelenic, who is completing her master's degree in exercise science and nutrition & wellness this summer, is one of four on-ice instructors working all four sessions each day this week, along with DI women's Assistant Coach Josh Graham ('10, '12). Kelenic and DI women's Head Coach Chris Lowes and DII women's coaches Sara Madero and Rena Leone will also help direct a Girls Camp for players 18 and under in July.

Besides the on-ice sessions with Liberty coaches and counselors and dry-land workouts with Club Sports Coordinator of Strength & Conditioning Chris Kerr, campers participate in a variety of activities throughout the week to take advantage of Liberty's state-of-the-art recreational facilities — including swimming and rock climbing at the LaHaye Recreation & Fitness Center, bowling at the Montview Bowling Alley, tubing at the Liberty Mountain Snowflex Centre, and soccer at the Thomas Indoor Soccer Center.

"We do so much more than just play hockey, and it's fun to hang out with them and get to know them a little better," Hamilton said. "It's rowdy, but it's a lot of fun. The campers love the counselors, and it's always a good time."

Many of the campers are from out of town and stay overnight in Liberty's residence halls and eat meals at Liberty's main dining facility, the Food Court at Reber-Thomas.