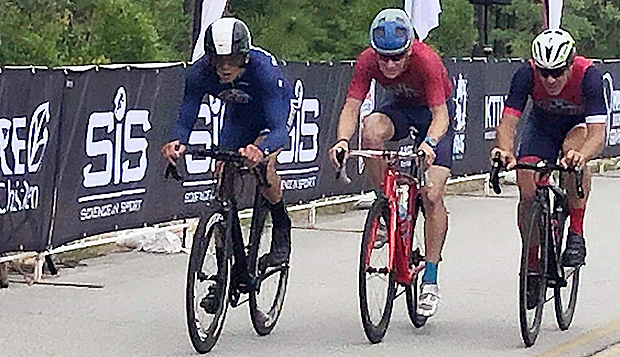 Competing in the U23 time trial, on a 30-kilometer out-and-back course with rolling hills on the edge of the Appalachian Mountains in western Maryland, Shashaty placed 33rd out of 44 riders in 42 minutes, 21 seconds, averaging 26.5 mph.

"I really had no idea what to expect, placement-wise," he said. "I didn't do as well as I would have liked, but I am pretty content with it. It is a good benchmark moving forward and there are a lot of things to take away from this weekend. There are definitely things I could have improved."

Shashaty had to adjust to a new bike and different riding position to meet UCI regulations for the time trial.

"I had to change everything I had been used to with a completely different setup from the start," he said. "I wasn't really comfortable the whole time, especially the last 10K when it started to affect me."

The winning cyclist, who is a member of a UCI Professional Continental team, finished six minutes ahead of Shashaty.

"He was at a completely different level in his fitness, being more comfortable on the bike, and he had a better sprint kick than me," Shashaty said. "Step by step, I will get to that level. I could have done a lot better, but also, I wasn't the slowest one out here. There are tangible things outside of my physical capabilities that could make big differences."

He has just 12 credits left at Liberty this fall to complete his degree in interdisciplinary studies with a concentration in coaching and sport management. He plans to begin pursuit of a master's degree in exercise science next spring.

"I want to coach cycling or triathlon, something I am passionate about, and can apply the knowledge (from studying exercise science) into my own competitive career path, understanding how the body responds and works."

Shashaty, who lives in Midlothian, Va., will take a few weeks off in his training before deciding if he wants to compete in the Virginia State Time Trial Championships, set for July 16 in Stony Creek, Va.

"I am looking forward to some time off," he said. "It is a long season from end of February until now, doing two sports, triathlon and cycling. I need a bit of a break, mentally and physically."

Shashaty credits Flames cycling Head Coach Timo Budarz for developing him as a cyclist with potential to turn professional in the near future.

"He has definitely changed my training strategy and philosophy," Shashaty said. "To have a cycling specific coach who has that kind of knowledge and has trained at a high level has helped progress my cycling career. This was my best season by far so far and it has been really beneficial having him as a mentor. Getting started in cycling is a whole new process for me, but I definitely want to try to get on a pro team in the next year or so and see how far I can go with it."