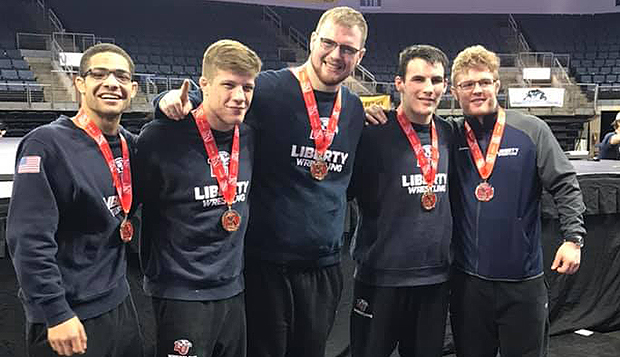 Since joining the NCWA ranks in 2012, the Flames have emerged as the most dominant program in the nation, and Head Coach Jesse Castro and his experienced staff of assistants anticipate that tradition of success continuing into the future.

"That's been the goal, since we've been in the NCWA," Castro said. "When we reclassified (from NCAA Division I), we knew there was going to be a dropoff and it would take time to build the program back up. But we experienced relatively quick success, and last year set a precedent. Our goal now is not just to be on top, but to maintain that level of excellence in our time in the NCWA."

Castro said the process is never easy, but he has noticed how success has bred success since the Flames won their first NCWA National Duals championship in 2012 and captured their first NCWA Grand National title in 2015. They became the first program to repeat as NCWA National Duals champions with their fourth title in January near Las Vegas before winning their third NCWA Grand National team championship in Allen, Texas, in March.

"Every year is a challenge in terms of losing seniors or having injuries and rebuilding," Castro said. "Other than a year or two, we have never had to rebuild, per se. We are pretty much always reloading, and the recruiting class we have coming in this year is pretty loaded."

The class includes two four-time high school state champions — Ethan Martin, who will contend with 174-pound national champion Sam Karel for the starting position at 184 pounds, and Rick Weaver, who will help fill the void left by team captain and national champion Dominick Johnson at heavyweight.

Liberty has four of its five individual national champions returning next season, including Karel and rising senior 157-pounder Andrew Burgette. Besides two-time defending national champion Austin Amos (a rising senior who won at 235 pounds in 2018 and 197 in 2019), the Flames also return rising junior Jeffrey Allen, who will try to defend his 235-pound title.

"We can use those guys (Allen, Weaver, and graduate heavyweight David Smith) interchangeably at the upper weights," Castro said, "To have three wrestlers of that caliber up there puts us right back to where we were last year."

Castro and Assistant Coach Chris Williamson will also have former 184-pound co-captain Josh McIlhenny on board as the Flames' graduate assistant this fall, complemented by a handful of volunteer coaches.

"It's paramount for any program, at any level, to have a good coaching staff," Castro said. "Those guys are key and we wouldn't have the success we've had without them mixing it up with the guys on the mat, showing them a different level of intensity."

Above all, he said the team's spiritual focus has had the greatest influence on elevating the program.

"When you have the freedom to build eternal values into men's lives, that's what it's all about," Castro said. "That's something we try to build year-in and year-out, by implementing principles of leadership and team-bonding elements, and the Lord has really blessed us these past couple years. We've got a team that is coming together, and it has manifested itself on the mat. We are coming off one of our best years — athletically, academically, and spiritually."

On top of Liberty's mission of Training Champions for Christ, Castro has kept his program on an upward trajectory by instilling in his wrestlers a high calling and sense of purpose.

"Our motto has always been to passionately pursue and persist in excellence," he said. "What sums it up best is what's written on the back of our shirts, ‘My Utmost For His Highest.' We try to live out Colossians 3:23: ‘Whatever you do, do it unto the Lord.'"