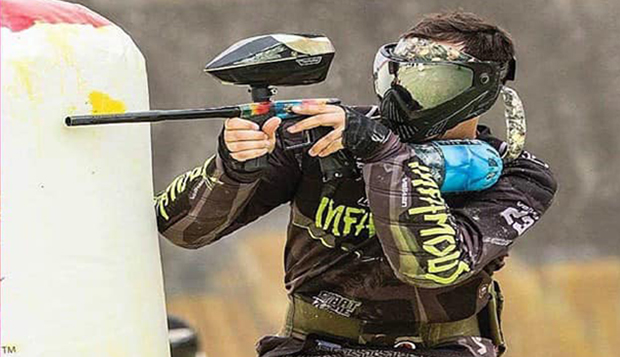 Brian Natzke fires beside a bunker as a player for the NorCom Infamous based out of his home state of California.

Former Liberty University paintball player Brian Natzke ('16) has taken his game around the world, most recently to Sydney, Australia, where he played his first professional tournament over the weekend with the Outlaws.

The seven-member team, which includes three with professional experience, lost Friday's opening match of the second round of the Super 7s series to the Expendables, a team from New Zealand, 4-1.

"It's a new pro team and we are working on meshing together and growing together as a team," Natzke said by phone Saturday morning before taking the field for the second round of competition. "We are getting progressively better."

The Australian league is in its formative stages and has recruited amateurs and professionals from the United States and Europe to strengthen its player base.

"It's growing," Natzke said. "It's not as big as it is in the U.S., but it's definitely getting there. I never expected to be playing pro paintball in Australia. It is the highlight of my career so far, and hopefully it goes up from here."

He said a highlight for him in the tournament was shooting last season's American MVP pro player Chad George of the Sydney-based Eskimo Brothers as he was diving into a bunker three steps out of the start box.

Natzke, who is from California, arrived at Liberty in 2012 after serving in the U.S. Navy out of high school. He picked up paintball in 2011 when he was stationed in Hawaii and refined his game with the Flames before graduating with a degree in commercial aviation. He currently builds motorcycles for Harley Davidson in Florida.

While at Liberty, Natzke played two seasons concurrently with the Abilene (Texas) Addiction, placing fourth at the D4 Division at the World Cup in 2013 and 11th in the D3 Division in 2014. Since then, he has played for NorCal Infamous (a D2 team in California) and the Frankfurt (Germany) Droogs in the NXL in Europe.

"I love to travel," Natzke said. "It's definitely very fulfilling and wonderful to get out and meet people in different cultures around the world."

His playing experience at Liberty prepared him well for competition around the country and overseas.

"I definitely bring a different dimension and dynamic to my team because of the experience I had at Liberty and experience playing around the United States and in Germany," Natzke said. "I'm a very versatile player and can play a lot of the back positions, but my main thing currently is playing at the home center and shooting a lot of paint — killing opponents off the break and allowing team members to move up the field and finish the points."

At Liberty, Natzke developed into an anchor for the Flames' attack, where his role was to serve as a heavy gunner who barraged opposing teams and provided support artillery from the back line.

"I wouldn't trade my time at Liberty for anything," Natzke said. "That was a major growing time in my personal career and my paintball career. Playing with Liberty definitely provided me the opportunity to reach the level I'm at currently. The weekly practices and level of competition we faced at tournaments was great, and the quality of coaching from Todd Hoglund and Brian Davidson was outstanding."