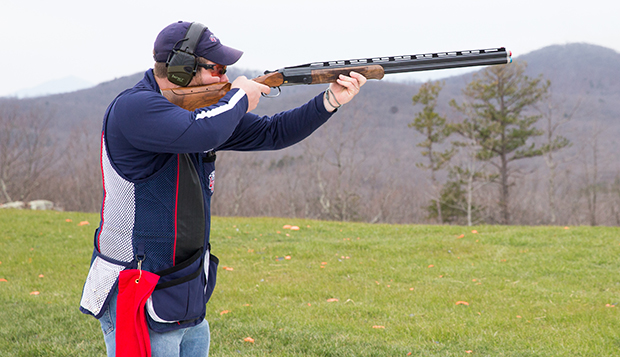 Josh Lancaster, a recent graduate, was one of four Flames to earn Collegiate All-American status. (Photo by Kevin Manguiob)

"These are awards put out by the National Skeet Shooting Association so it's a pretty big deal," Liberty Head Coach Dave Hartman said, noting the selections did not factor in their performances at the ACUI Collegiate Shotgun National Championships in San Antonio, but their American Skeet showings at other events. "Only the top eight collegiate shooters in the country make the list and we had four of those."

Incoming freshman Victoria Hendrix was selected to the Junior Women's squad with an average of 90.86. A national honors scholarship recipient who made the U.S. Team, Hendrix won the International Bunker Trap event at the Arizona State championships and also a Junior Olympic competition in Colorado Springs, Colo., earlier this month.

Rising junior Mitchell Feaga, a national champion in small bore rifle and bronze medalist in air rifle at the NRA Collegiate Club Championships, competed at a Junior Olympic event in Colorado Springs last week and rising senior co-captain Liz Wesner is preparing for another in the third week of June.

Liberty will be hosting the shooting sports events of the State Games of America from Aug. 2-4 at the Liberty Mountain Gun Club.