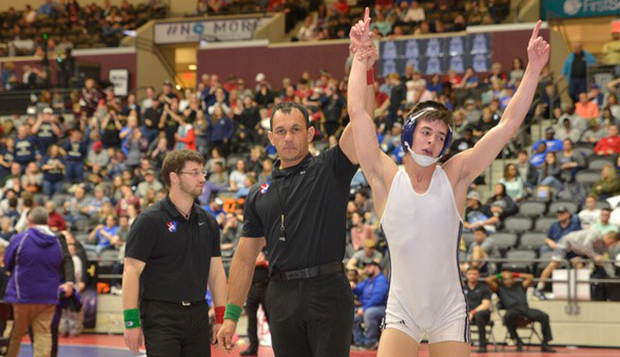 While Liberty University's two-time defending NCWA National Duals and NCWA Grand National championship men's wrestling team has been loaded at the middle- and upperweight classes in recent seasons, it has been lacking in quality lightweights.

In recruiting for the 2019-20 season, Flames Head Coach Jesse Castro has targeted filling holes in his lower weight classes, and landed his first commitment from Wesley Solomon, a 126-pound state champion out of Shiloh Christian (Ark.) School.

"He kind of fell into our laps," said Castro, who expects him to contend for the 133-pound starting position. "He reached out to us and we pursued him, too, but he was a surprise to us."

Attracted by Liberty's world-class Christian education, Solomon had heard about the Flames' nationally prominent wrestling program, and met Castro and his coaching staff during his College For A Weekend (CFAW) visit in early April.

"They're awesome," he said. "I just reached out and said I'm coming to Liberty and wanted to look into wrestling. We hit it off from there."

After placing fourth as a freshman at 106 pounds, sixth as a sophomore at 113, and third as a junior at 126, Solomon capped a 103-38 prep career by going 45-3 with 20 pins in his senior season. He topped it off by becoming the first state champion at any weight class in the history of Shiloh Christian's wrestling program, leading it to a best-ever third-place team showing.

Solomon will challenge himself on and off the wrestling mat at Liberty, where he plans to pursue a degree in business administration while also participating in Liberty's Army ROTC program in preparation for a military career after graduation.

Before arriving for the fall semester, he plans to maintain his strength and conditioning as well as his technique on the mat through regular workouts.

Solomon also shot trap for Shiloh's shooting sports squad that has placed at the state level and won a couple regional tournaments, and plans to utilize the shotgun range at the Liberty Mountain Gun Club in his spare time.