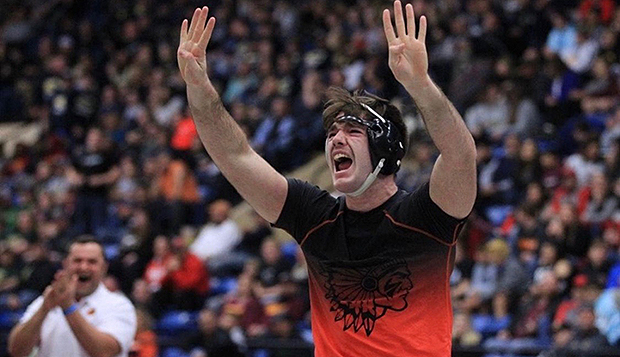 Ranking among the top of the incoming class is Ethan Martin, a four-time Virginia High School League (VHSL) Class A state champion at Rural Retreat High School (twice at 170 pounds and twice at 182) who has participated in the Liberty Flames Wrestling Camps since he was a freshman.

"It's going to be a big step up from high school wrestling, but I am excited to see how far I can go with the teammates I have and with Coach Castro as my coach," Martin said. "We're going to have solid upperweights, as usual. I'll slide in wherever I need to go, whatever's best for the team and myself."

"He will certainly be an impact player right off the bat and he will develop quickly," Castro said. "Sam and Ethan will be great teammates and training partners and they are going to hone each other."

Martin, who capped a 151-9 career record with a 35-0 mark his senior year, is Rural Retreat's third four-time state champion in school history, and third in the past three seasons.

He plans to pursue a degree in mathematics with teacher licensure at Liberty and believes wrestling has prepared him to meet the rigors of life as a college student-athlete, both on the mat and in the classroom.

"My wrestling career has had a lot of ups and downs, and it has always showed me how much you have to work for something in life, which I have carried on into my academics," Martin said. "I have been taking more difficult courses over the last few years and have had to crack down and study and keep working at it."

He will compete with a team from New Jersey at the National Duals later this month before spending the summer training and lifting weights to prepare for the transition to collegiate wrestling.

"Liberty's got a home feel like I've never felt before," Martin said. "With the coaching staff and the teammates I'll have there, the sky's the limit."