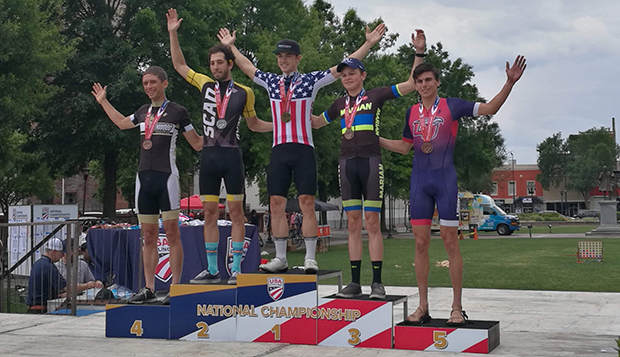 "At nationals, they split the scholarship from the non-scholarship programs, and even though we race as a Club Sports team at Liberty, USA Cycling considers us a varsity program," Liberty Head Coach Timo Budarz said. "For Freddie to finish fifth against cyclists from varsity teams was phenomenal, especially since he had completed the team time trial a few hours earlier."

Riding together as a pack, the foursome had placed 11th in the 35K team time trial in 50:17.89, though Yoder had to pull out after the first lap.

On Saturday, Shashaty placed 33rd out of 75 riders in 2:15:28 for the men's varsity road race, which was shortened due to threats of lightning from five to four laps on a challenging 14.9-mile course, for a total of close to 5,000 feet of elevation gain and loss over nearly 60 miles of cycling.

"He was right with the tail end of the main pack, with one big cluster of 40-45 riders at the end of the race, which finished with a brutal six-percent grade climb," Budarz said. "He tried to go a little early and didn't have it in the legs to finish strong. All in all, it was a very positive experience to show that he has what it takes to compete at that level."

Shashaty also finished 35th in 1:20.13 out of 68 riders in Sunday's criterium, avoiding multiple crashes on the rain-covered course with hairpin turns in downtown Augusta that took out close to 40 cyclists.

Complete results from the weekend's races are available online.

With several members of this year's team graduating, Budarz is hoping to recruit more cyclists for his second season at the helm starting this fall.