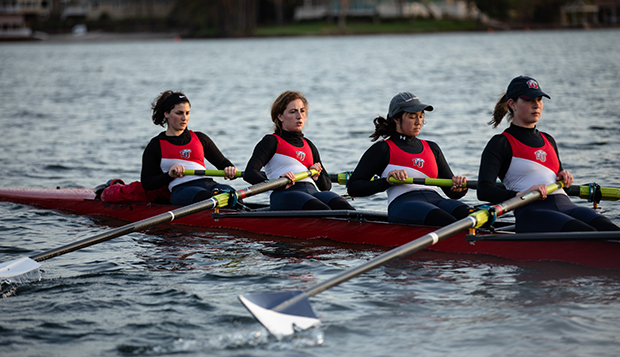 Both of the boats Liberty University's crew team entered in this past weekend's Southern Intercollegiate Rowing Association (SIRA) Championships at Lake Melton in Oak Ridge, Tenn., placed in the top five of their respective Grand Finals.

"Having our only two boats make the A finals was amazing for our team," Liberty Head Coach Debbie Prowse said. "It was a great finish for us."

"We pulled out in front at about 1,000 meters and stayed in first place the rest of the way for a very decisive victory," Prowse said. "They broke away from the pack and pulled away. I am super proud of them, especially since two of them just learned how to row this year after training all winter on the indoor ergs."

Senior Kaylee Ruiz, who previously rowed with the team, served as its coxswain for the past two weeks, encouraging newcomers Lindsey Bicknell, a freshman, junior Tori Drumheller, and sophomores Joanna Moran and Meredith Thompson, who have rowed since the fall.

"They have been working really hard, and are super determined and very focused," Prowse said. "They just want to win and to row the best that they can. They are always asking what they can do to improve, and they have a good team mentality. We still have things to work on so we can gain some more speed over the next few weeks." The team is preparing for the May 24-26 American Collegiate Rowing Association (ACRA) National Championships at Lake Lanier in Gainesville, Ga.

"They did awesome, too," Prowse said. "Even though they didn't medal, it was a really tight field and that is the highest the men's Varsity 4 has placed in the last four years. For them to make the top three in the time trial, they were super surprised. For them to be at that level with just the four rowers and no alternates shows that they have been working really hard."

That boat will compete in its final race together this weekend at Rocketts Landing in Richmond, where it will likely row against boats from Christopher Newport, ODU, Richmond, Virginia Tech, and William & Mary in a field similar to the one it faced at the Waterfield Cup, where it finished runner-up to the host Hokies. Krupansky and Weisman will team up to skull in the Men's Double for the ACRA Championships in Gainesville. 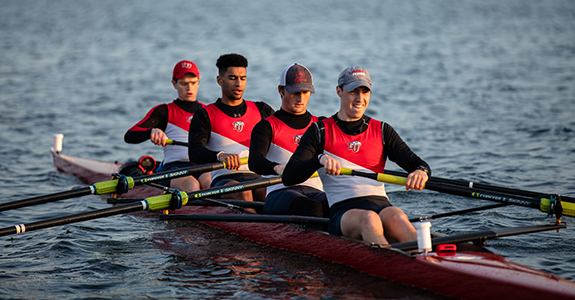