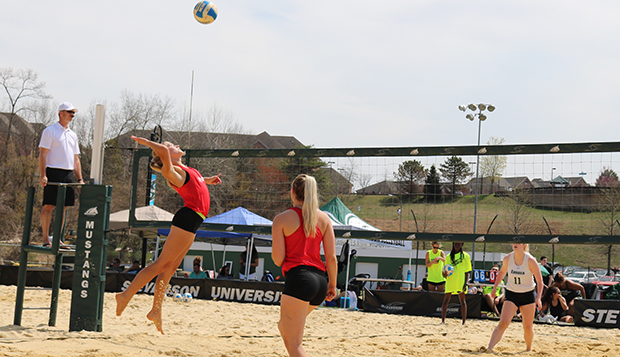 Liberty University's women's beach volleyball team competed in its first four best-of-five matches against NCAA programs over the weekend in Maryland, where it lost to Loyola (Md.) and NCAA Division III Huntingdon (Ala.) on Saturday before being swept by NCAA DIII host Stevenson (Md.) and edging Loyola in a rematch on Sunday.

The Lady Flames' top tandem of juniors Alyssa Register and Olivia Jensen won three of their four matches at the No. 1 seed to lead Liberty. Their second win over Loyola — along with victories by the No. 4 combination of sophomore Emily Lagerquist and senior Rylie Rice and the No. 5 pairing of seniors Heather Podell and Audrey Brown — helped the Lady Flames pull out a 3-2 team triumph over the Greyhounds, who had won the teams' first match by the same score.

Register and Jensen accounted for Liberty's only victory in a 4-1 loss to Huntington before Stevenson shut out the Lady Flames, 5-0.

"We didn't know what to expect going into our first ever NCAA matches and, overall, we grew a lot over the weekend," Liberty Head Coach Kaleb VanDePerre said. "We grew closer together as a team and mentally throughout the game, with our technique and strategy. Our top team competed really well against some solid pairs and our freshmen got some great experience and really improved, which is very encouraging."

VanDePerre said the Lady Flames' first-year duo of Mare Hammersmith and Sydney Walsh may have been the most exciting to watch, though they finished 0-4 at the No. 2 seed.

"Syd is in her third week on the team and you could see things click each point," he said. "She battled through frustration, playing against some really good opponents, and showed flashes of dominance that we are expecting to see develop over the next few years. Mare did a great job defending, working through points, and talking Syd through the ups and downs."

VanDePerre, Lady Flames Assistant Coach Jess Nelson, and Flames senior Matt Jones each offered instruction to one of the Liberty pairs on each of the three courts.

"We all got a lot of new experience and are excited about the future," said VanDePerre, who gave a shout-out to Stevenson for putting on such a fantastic team event. "It was nothing but class and we are excited to keep working on that relationship."

He said the primary focus for the men's and women's teams' as they prepare to host the National Collegiate Sand Volleyball Association (NCSVA) Mid-Atlantic Regional Championships April 27 will be on being aggressive and competing for every point.