Women's Ultimate advances to regionals for sixth year in row 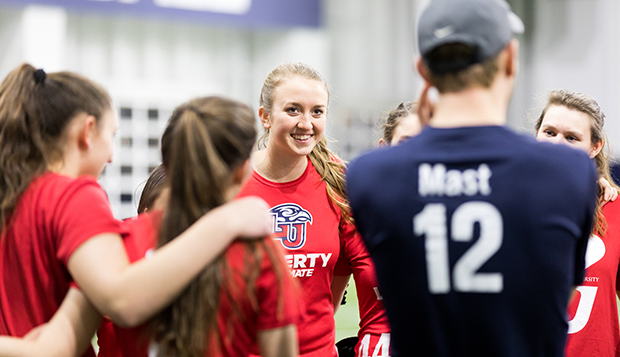 "Overall, we had a good weekend," Liberty Head Coach Jonathan Mast said. "It was easily our best tournament offensively and defensively that we've had all year. It was good to see the strategies we've been working on executing in practice come to fruition at the tournament. We have a number of new players who have stepped into roles and we have been able to utilize a lot of them which is incredibly helpful."

On Saturday, the Lady Flames upset William & Mary in the opening round of pool play, 8-5.

"We broke them to start the game and our captain, (senior) McKenzie Ross, caught a layout goal to start the scoring," Mast said. "She got extremely muddy, but that set the tone for the day and that win was the key to us clinching a spot in regionals."

Ross and junior co-captain Anna Marie (Stow) Hagerty played the most points over the weekend and were the team's offensive catalysts as handlers.

Liberty lost to Virginia, 10-2, in the second round and again in the first-place final, by a 10-4 count, as the Cavaliers won the tournament for the sixth season in a row. In the third round of pool play, the Lady Flames defeated George Mason, 11-5, before ending the day with a 9-5 victory over host VCU.

"We played a solid game against George Mason," Mast said. "We were very much in control of the game the entire time and everybody contributed. Against VCU, the key was taking our three best defenders, (seniors) Victoria Dissmore and Charis Jantomaso and Maddie McCoy, a freshman, and shutting down their top two handlers. They are both really good at hucking the disc and we had stellar defensive performances against them."

On Sunday morning, Liberty doubled up Virginia Tech, 8-4, sparked by a layout catch by junior Bethany Fowle for the game's first goal, which allowed the Lady Flames to dictate control on defense.

Liberty lost to JMU, 7-4, in the final round of pool play despite playing phenomenal defense. It then dropped rematches with UVA and William & Mary, 12-6, in the first- and second-place games, respectively, to finish third, followed by fourth-place JMU.

Besides the four Virginia qualifiers, the Atlantic Coast Regional tournament will feature six teams from the Carolinas Conference with the remaining six coming from the Washington, D.C., area. Only the top two teams from each of eight regions advance to the May 24-27 USA Ultimate Championships in Texas.

"We are looking forward to traveling with the men's team, which will go to regionals for the first time since 2011, and continuing to improve and peak down there," Mast said. "It is nice to see the work of the girls start to pay off with growth from rookies and experienced players alike."