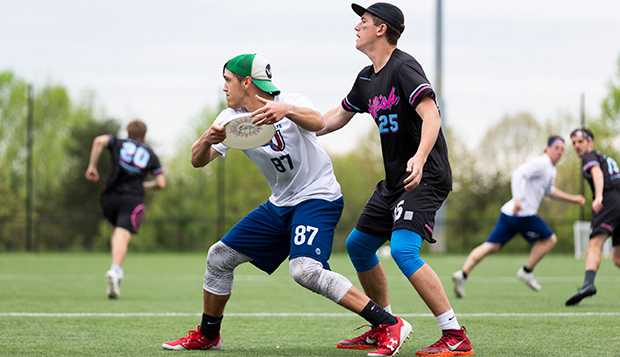 Liberty University's men's Ultimate team qualified for the first time for the April 27-28 Atlantic Coast Regional tournament in Axton, Va., by placing fourth out of eight teams in this weekend's Virginia Conference Championships at the Liberty Mountain Intramural Complex.

The highlight of the tournament for the Flames came in the last of four games on Saturday when they rallied to upset second-seeded William & Mary, ranked 28th in the nation, 11-10, on a spectacular Universal point.

After trailing 6-2 early, Liberty pulled within 8-7 by halftime and tied it up at 9 and 10 before senior Austin Heston made a defensive play to give the Flames a final possession. Sophomore Jake Norman distributed the disc to junior Ben Reutener who hucked it deep downfield for sophomore Dan Mills.

"He jumped over everybody and had it in his hands, but somebody took out his legs and he lost it before Josh Sumpter laid out and caught it, making a diving catch in the end zone for the winning score," Flames Head Coach Kevin Habermas said.

On Sunday, the Flames lost a rematch with Virginia, 15-6, before opening a 5-1 lead and securing a regional spot with a 12-7 win in a rematch with the Patriots.

"Austin Heston has played for four years and never made it to regionals, so he was ecstatic to say the least," Habermas said, noting Heston was selected by his teammates as tournament MVP for his defensive breakups, passes, and scoring catches over the weekend.

Virginia Tech defeated UVA in the championship, 15-12, before William & Mary beat the Cavaliers in the second-place match. JMU clinched the final regional berth in fifth place.

Liberty could have placed as high as second, but cleared its bench and lost its rematch with the Tribe to settle for fourth.

"We put all our backups in because we wanted to get them as much experience as possible," Habermas said, noting that as long as the team placed in the top five, its placement didn't affect its seeding for regionals.

Besides the five Virginia qualifiers, there will be seven teams from North Carolina and South Carolina and four from the Maryland and Washington, D.C., area at the 16-team regional tournament, with only the top two advancing to USA Ultimate Division I Men's Collegiate Nationals set for May 24-27 in Texas.

The Flames and Lady Flames, who qualified for their sixth consecutive regional tournament, will be playing on the same dates at the same location.

"It's going to be good experience for the guys to be able to play against quality opponents, get a feel for regionals, and build a program from that," Habermas said.

He hopes Reutener, who sustained a hard collision with a JMU defender in Saturday's match, and Mills and Norman, who are nursing knee injuries, will be fully healed in time for regionals. 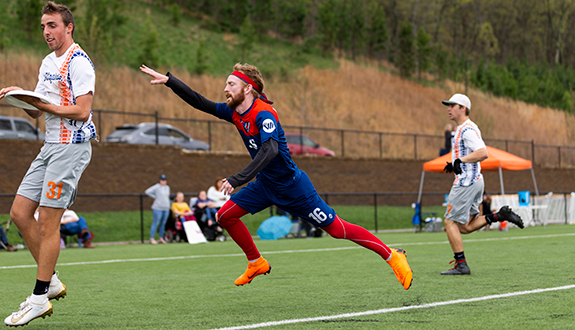