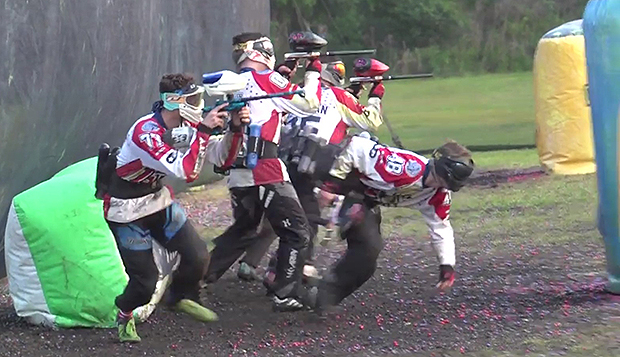 Liberty's paintball team breaks out at the start of a point during a match at the national championships in Florida.

Injuries and penalties proved costly for Liberty University's paintball team in this weekend's National Collegiate Paintball Association (NCPA) Championships in Kissimmee, Fla., where the defending national champion Flames' Class A Gold line advanced to the Final Four for the eighth year in a row before being ousted in the semifinals by eventual champion Drexel.

"We had some unfortunate injuries to two of our senior starters (Kyle Babb in Friday's preliminaries and Brent Jones in Thursday's final practice) and one of our subs (junior Giancarlo Spinelli)," Liberty Head Coach Brian Davidson said. "That definitely worked against us and was a little too much to overcome. It was tough to keep fresh bodies out there, but I was definitely still proud of them for fighting through it."

He said field conditions contributed to the injuries, with players sliding on the course's sandy rough patches.

"Our conditioning was almost perfect," Davidson said. "No one got tired, and we stayed hydrated."

Liberty defeated Michigan State, 6-3, in its first preliminary match on Friday before falling to Temple, 5-2. Then on Saturday, the Flames completed qualifying play with a 6-1 triumph over Purdue before dominating North Carolina State, 8-1, in the quarterfinals.

Babb carried the flag for Liberty's only point in the final 1 minute, 20 seconds of the 3-1 semifinal setback to Drexel, but had to limp all the way to the box due to the leg injury sustained on Friday.

"Even with his injury, Kyle was not willing to quit, which was very encouraging to the team," Davidson said of Babb, who was replaced in the lineup by senior David Lopes. "He didn't play on Saturday, but still played an important leadership role, helping to get us this far by keeping us motivated."

Fellow senior Josh Montanari had the flag in hand and was about to trim the final deficit to the Dragons to one point when time expired.

"I think we could have beaten Drexel, but we had an unfortunate penalty at the end of the first half that gave them their second point and then we started the second half with only four bodies," Davidson said. "We played them the last two years and beat them very dominantly, but they had a better lineup this year."

Drexel went on to edge Central Florida in the championship match, 3-2.

Even in defeat, the Flames showed excellent sportsmanship and maintained a positive attitude and witness.

"I was super proud of the guys and the way they represented Jesus on and off the field," Davidson said. "It was clear we were a reflection of Him, so we still did what we came out to do — represent Liberty and represent our God, and it was still a successful event. We fought our hardest and will just have to come back next year and try it again."