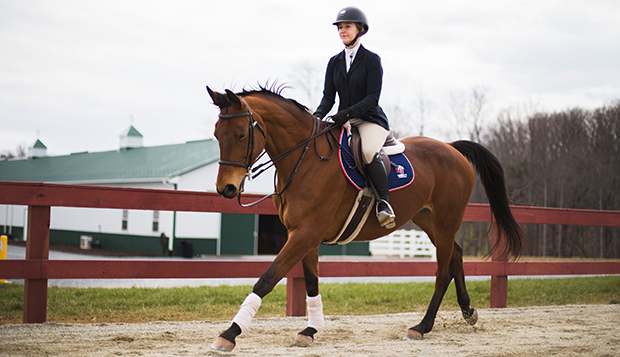 Gayheart needed to place in the top three out of the five Cacchione Cup regional representatives in Zone 4. She also placed fourth out of 10 riders in the Open Fences competition and sixth out of 10 in the Open Flat event, needing to finish in the top two to advance in those classes.

"She performed solidly in all of her events and probably shined the brightest in the two phases of the Cacchione Cup, which were judged separately," Liberty Hunt Seat Head Coach Suzanne Flaig said. "It's a great honor to be included with some of the top riders in the country and to represent our region and our school at nationals. We are very excited that she gets to compete on that stage and think she has a very good chance of doing well there."

She is Liberty's second qualifier in three seasons to compete for the Cacchione Cup at nationals after Liz Chenelle placed 10th as the Lady Flames' first contestant in 2017. Gayheart will be one of 24 riders (three from each of the IHSA's eight zones) in the two-day event.

"There will be a flat phase and a fences phase before the judges decide how many advance to the rideoff," Flaig said. "Sometimes they will take the top 10, sometimes only the top three."

Also for the Lady Flames at Saturday's Zone 4 show, Kate Donnelly placed third (one spot from qualifying for nationals) and fellow junior Brooke Boan came in seventh in the Walk-Trot-Canter class and senior Sarah Reece finished fifth in the Walk-Trot category.

"It was a great opportunity for our students to ride and they represented our program very well," Flaig said.