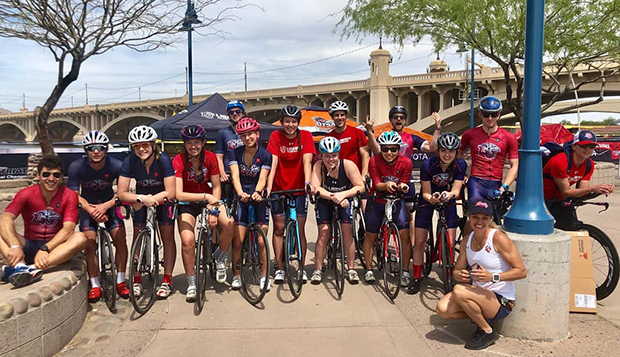 Giovanni Bianco, a graduate student from Italy, finished 12th individually out of more than 1,100 competitors in the Olympic-distance race to lead Liberty University's men's triathlon team to a sixth-place showing out of 92 schools at the USA Triathlon Collegiate National Championships this past weekend in Tempe, Ariz.

"I thank God for the opportunity to compete in Arizona, to represent Liberty University, and for the time spent with the entire team," Bianco said. "I am really happy with the results that we achieved over this championship weekend."

"I was impressed and very pleased with our results," Liberty Head Coach Heather Gollnick said. "Our kids really rallied and gave it their best effort over the course of two days of racing."

Liberty closed out the weekend by finishing 16th out of 44 teams entered in the mixed relay event, which featured two men (Bianco and Brasher) and two women (Clark and Ziebart) taking turns completing a 250-meter swim, 5K bike section, and 1.2K run. The Flames and Lady Flames combined to finish the race in 1:17:54, paced by Bianco's 17th-fastest leg in 17:21.

"The mixed team relay is a high-intensity event," Gollnick said. "It was spectacular."

Brasher was fourth out of the water but suffered a flat tire on the bike, showing his dedication to his teammates by finishing the cycling stage despite the obstacle. Clark posted a strong finish after a mechanical difficulty on the bike, finishing that phase of her race with a broken seat, before Bianco moved up several positions with his speed in all three stages and Ziebart passed at least three competitors on her anchor leg.