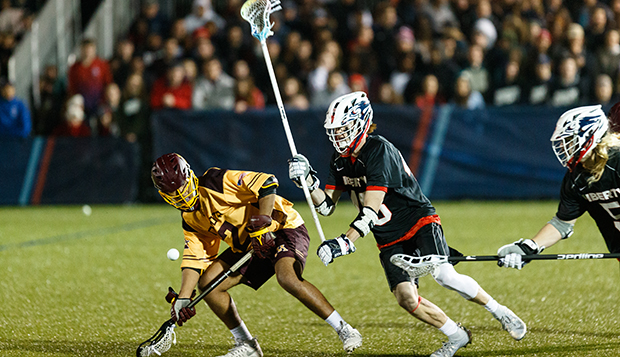 Liberty University's third-ranked MCLA Division I men's lacrosse team improved to 7-0 in Midnight Mayhem matchups early Saturday morning at the Liberty Lacrosse Fields. The Flames won as decisively against 24th-ranked Minnesota, 19-6, as they had against unranked Midnight Mayhem foes Georgia (19-5 in 2015) and Florida (18-6 in 2016).

"That was a complete game from start to finish, from all aspects — faceoffs, defense, offense," Flames Head Coach Kyle McQuillan said. "Obviously, we're never a finished product and there are some things we can continue to work on, but I was really happy with how the guys played tonight."

The Flames (11-0) rallied behind a spirited College For A Weekend crowd early, surging to a 5-0 lead just over five minutes into the first quarter

"Everybody played really well and played as a team tonight," said Liberty senior midfielder Chase Wright (two goals, one assist). "There were thousands of people here tonight. It was awesome to see everybody coming out to support, and everybody kind of fed off of that energy."

Junior attack Caleb Britton (three goals) scored just 46 seconds after the opening faceoff, converting an entry pass from sophomore attack Thomas Pinel, before senior Win McKeever sparked Liberty's transition game with a defensive stop and clear. He scored on the other end off an assist from senior midfielder C.J. Nichols (two goals, four assists), who extended the Flames' lead to 3-0 by finishing a feed from freshman midfielder Cameron Carter.

"We've been getting production from pretty much everybody this year," McQuillan said. "It's a testament to our depth and to the mentality of ‘next man up' that we were able to put guys in and cycle guys through for a lot of quality minutes on both sides of the ball."

Freshman Cole Jankowsky won the ensuing faceoff and scored into the top left corner while falling down for a 4-0 advantage with 10:47 left in the first quarter. He won another draw and eluded defenders up the right sideline before assisting junior midfielder Derrick Esh in the right crease for a one-on-one shot past Golphers goalie Jack Courington.

"Faceoffs were a huge improvement from last week (a 12-11 win over No. 6 South Carolina)," McQuillan said. "We won that ground-ball battle and we were pretty dominant in most categories in the game tonight."

Back-to-back goals by Minnesota attack Amar Batra ended the shutout bid for Flames senior goalie Brayden Harriman (11 saves) before sophomore attack Cooper Branham (three goals) answered in the final minute of the first quarter, emerging from behind the left side of the cage and ripping a sidearmed shot past Courington.

Nichols started the second-quarter scoring two minutes in, stretching Liberty's lead to 7-2 with a sharp-angled shot from the left side after making an athletic move from the top of the box. After a goal by Gophers midfielder Jackson Paradise three minutes later, the Flames survived being two men down before scoring three straight to end the first half. Wright found the net with a running bounce shot before Carter scored on a submarine shot from the right side, and Britton added a turnaround finish after catching an entry pass from the left corner by senior attack Sam Gregory (three goals, one assist).

Gregory ignited Liberty's attack just over a minute into the second half by scoring off Wright's assist from behind the cage. Minnesota's Malik Ekpenyong answered two minutes later before Gregory responded less than a minute after that by picking up a ground ball beyond the Gophers' defense, pivoting, and putting away a point-blank finish.

Wright then netted a running left-handed bounce before Pinel sent an entry pass into a cutting Britton in front for a quick-finish and Nichols assisted Branham for a catch-and-release turnaround shot, extending the Flames' lead to 15-4.

Branham scored from on his knees in the right crease after taking an entry pass from Nichols before Gregory completed his hat trick off a nice feed from freshman midfielder Ryan O'Connor with 24 seconds left in the third quarter. Twice in the fourth, Liberty caught Gophers replacement goalie Micah Schultz out of position for empty-net scores by senior midfielder Chris Mickel and junior defender Charlie Shier, assisted by Mickel, for the Flames' final two goals.

The Flames have a quick turnaround before playing again Sunday at 2 p.m. at SELC Northwest Region rival George Washington (D.C.).

"We're focused on our next game, but we're looking to the future as well," Wright said. "Everyone's looking forward to the SELC's and then hopefully making it to the national championship again this year. We've got a long road ahead of us, but I think everybody's confident and we're playing well right now." 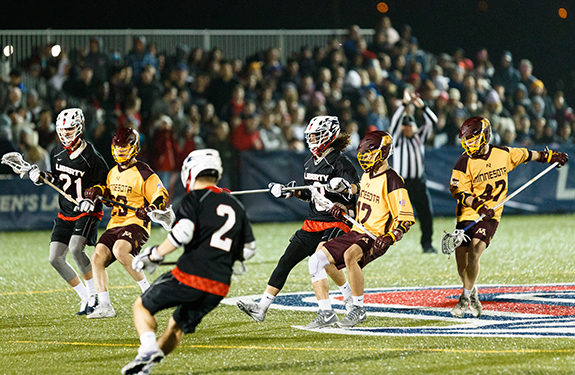 Senior attack Sam Gregory (2) looks for running room on transition against the Gophers.