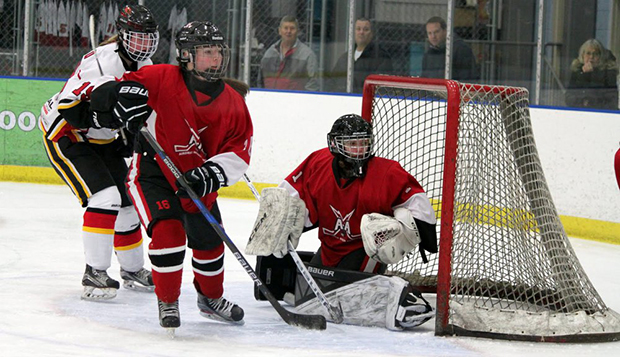 Kayla Savoie-Penton posted a 2.31 goals-against average and a 93.5 save percentage in 17 starts in goal for Coeur D'Alene.

"She is going to come in right away and be effective in pushing (Lady Flames starter) Nadia Rupoli and giving us a good goaltending competition," Liberty Head Coach Chris Lowes said. "As a coaching staff, we want to raise the level of competition at every position."

Savoie-Penton visited Liberty's campus in late January and made a positive first impression on the Lady Flames' coaching staff and her future teammates.

"She is a super athletic and really solid goalie," Lowes said. "We really liked her energy level and competition level when she was on the ice. We were really impressed with what we saw. She is going to be a great fit with the culture we are trying to build on. She's going to win a lot of games for us over the next four years."

Savoie-Penton made 530 saves in 17 starts this past season for the Coeur D'Alene (Idaho) Hockey Academy, allowing only 2.31 goals per game while maintaining a 93.5 save percentage and posting six shutouts.

"She plays in a good league and of the games I've seen her play, there were a few where her team was outmatched, but Kayla kept them in it against high-end players and shooters," Lowes said.

He said Savoie-Penton received excellent instruction from the coaches at the hockey academy she played for and has tremendous upward potential.

"She has something we are looking for in all of our girls — that desire to get better, and intrinsic motivation to work on their craft," Lowes said. "I think we have that in Kayla and the other recruits we're bringing in here."

Savoie-Penton plans to pursue a degree in exercise science: therapeutic science at Liberty while helping the Lady Flames contend for a third consecutive national title.

"I chose Liberty because I believe that it is a great school that will allow me to continue to develop in the classroom, on the ice, and as a person," she said. "Next season, I am most excited about being on a team that has a strong passion for hockey and a drive to get better each and every day."