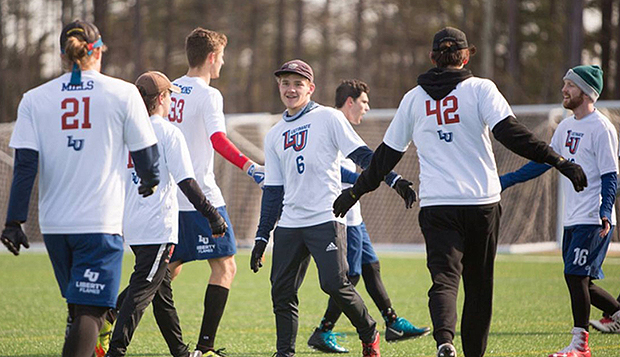 The tournament attracted teams as far away as New York and Vermont, where the championship team, NCAA Division III Middlebury College, is based.

The Flames lost to 58th-ranked Penn State, the tournament's No. 2 seed, 13-7, in the first round of the playoffs to slip to the ninth-place bracket, where they defeated Rochester Institute of Technology, 13-5, in the semifinals and Lehigh, 15-2, in the final. Liberty had lost to Lehigh, 15-8, at its first tournament of the semester.

The Flames (13-6 this spring) ascended to No. 95 in the USA Ultimate Division I rankings after debuting in the 170s at the start of September and in the 150s as recently as February.

Senior cutter Austin Heston played exceptional defense to share tournament team MVP honors with sophomore handler Ben Reutener, who did not sub out once over the weekend. Sophomore handler Dan Mills led the Flames in assists and sophomore Jake Norman had the play of the weekend with his diving catch for a score.

"Those four players are the anchors of the team, but everybody played really well," said Habermas, who formerly served as an assistant to Jonathan Mast on the women's team. "The guys have really bought into the system and are playing hard defense and smart offense. We've got a lot of good players and they're playing as a team and not as individuals."

Defensively, Habermas has kept opposing teams off guard with the element of surprise.

"My philosophy is to change up the defense from point to point so their offense can never quite get settled or get into a rhythm," he said. "We are running a whole different offense, too, so we have kind of switched everything around and there is a lot for them to learn."

Liberty will host the eight-team Virginia Conference Championships on April 13-14 at the Liberty Mountain Intramural Complex fields, where the top five teams will qualify for the Atlantic Region tournament. The Flames should be seeded in the top five for that tournament, behind No. 28 William & Mary, No. 43 Virginia Tech, and No. 48 Virginia Tech, and ahead of JMU, VCU, George Mason, and Radford.

"I think we're starting to turn some heads," Habermas said.