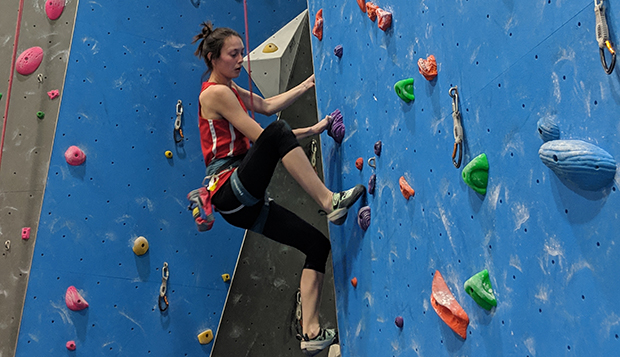 Casey Mahoney, fifth in women's speed climbing, is Liberty's only nationals qualifier in that event. (Photo by Elliot Gaunt)

Out of a total of 50 competitors, the Flames and Lady Flames had three of their 11 individual climbers qualify for the USA Climbing Collegiate National Championships set for April 26-27 in Murfreesboro, Tenn., based on their top-five finishes in male and female sport, bouldering, and speed climbing.

Junior Tori Perkins, who placed second for Liberty as its first representative at last year's national championships in Texas, returned from an injury that has sidelined her for most of the semester to finish runner-up at regionals in the women's sport division with 11,200 points.

Junior Connor Ellis finished fourth in the men's sport competition, also totaling 11,200 points, and senior Casey Mahoney placed fifth in speed climbing with a time of 13.89 seconds in the finals. Senior Ruth Jang came in seventh in the sport category with 9,500 points and is waiting to hear if she may receive a provisional qualifying bid to nationals.

"Everybody did great," Liberty Head Coach Elliot Gaunt said. "This was the first regional qualifier we've competed in so it was a new experience and we are glad to have three qualifiers, instead of just one last year, to represent us at nationals. I was proud of the team."