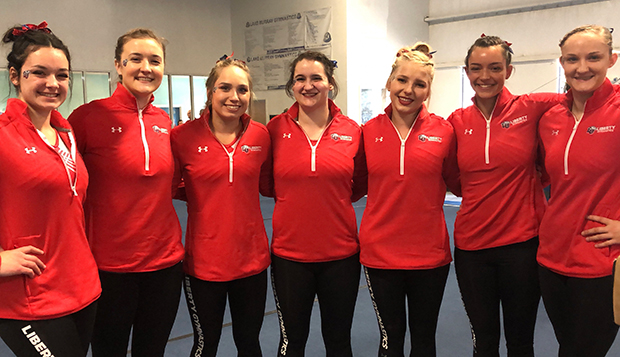 Julie Bouton placed first on the vault, balance beam, and floor exercise and won the All-Around competition and fellow senior McKella Johnson took first on the uneven bars and third in the All-Around to lead Liberty University's women's gymnastics team to a first-place showing at Saturday's Cocky Classic at the University of South Carolina. Liberty finished first in front of runner-up James Madison University and third-place Virginia Tech as well as Clemson, North Carolina State, host USC, Tulane, and Virginia at the National Association of Intercollegiate Gymnastic Clubs (NAIGC) competition.

"It was another good performance but we still have lots of room for improvement," Lady Flames Head Coach Tim Kappel said. "We head to (Daytona, Fla., for the NAIGC) National Championships in less than 10 days and we still have work to do."

The Lady Flames had won their only previous competition of the semester, Feb. 2 at Clemson.