Nichols nets game-winner as No. 3 Flames nip No. 6 USC 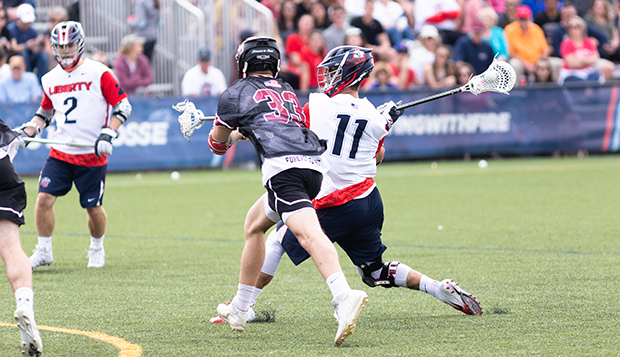 Senior midfielder C.J. Nichols' running bounce shot from the top of the box with nine seconds remaining in regulation lifted Liberty University's No. 3-ranked men's lacrosse team to a 12-11 triumph over No. 6 South Carolina, Saturday afternoon at the Liberty Lacrosse Fields.

It was a back-and-forth battle between two of the top teams in the SouthEastern Lacrosse Conference (SELC).

"That was the best lacrosse game played at Liberty University since I've been coaching," Flames ninth-year Head Coach Kyle McQuillan said. "With the way that USC played, the way that we played, back and forth, the atmosphere, the fan support was tremendous."

Liberty improved to 10-0 and avenged two losses to the Gamecocks (8-2) last season, the teams' only two previous meetings.

"This is a team that not only knocked us out of the SELC playoffs last year, but knocked us out in pretty convincing fashion," McQuillan said of the 16-8 setback.

Determined to defend their home turf, the Flames opened a 3-0 lead by the end of the first quarter, sparked by junior attack Caleb Britton's fast-break finish off feeds from senior defender Ean White and sophomore defenseman Mitchell Gorski at the 10:04 mark.

Britton (three goals) opened the second-quarter scoring by taking an entry pass from Nichols and netting a backhanded bounce shot from point-blank range for a 4-0 advantage with 8:23 left in the half.

But the Gamecocks showed they had plenty of fight, twice scoring back-to-back goals in a span of a minute.

Midfielder Griffin Giles' sidearmed shot from the top of the box ended Harriman's shutout bid with 7:52 left in the second quarter before attack Andrew Pizzo finished from close range, cutting the deficit to 4-2 at the 6:59 mark.

Freshman attack Cooper Branham stretched Liberty's lead to 5-2 by netting a dive shot from the left crease before attack Sam Weis answered at the 4:04 mark and Jono Durham cut the gap to 5-4 with his first of two goals from the left side of the box. Durham's second consecutive score tied the game at 5-5 just 14.4 seconds before halftime.

Branham started the second-half scoring by lifting Liberty to a 6-5 lead, releasing the ball a split second after being checked off his feet and falling to his back as it ripped into the net.

Giles tied it back up for USC before Durham capped a fast break with a shot from the left side and padded the Gamecocks' lead to 8-6 by finishing a feed from midfielder Drew Brown with 4:04 left in the third quarter.

Junior midfielder Derrick Esh pulled the Flames back within 8-7 with a spectacular top-shelf shot with 2:55 to go in the third quarter. Britton netted the equalizer in the final 20 seconds of the third quarter before junior defenseman Charlie Shier lifted Liberty to a 9-8 lead in the opening minute of the fourth.

Weis responded less than a minute later to retie the contest before midfielder Griffin Bailey gave the Gamecocks a 10-9 advantage by ripping a shot from the left side.

Senior attack Sam Gregory scored the next two goals for the Flames on one-on-one drives to the cage, knotting the score at 10-10 with 8:38 to play and 11-11 with 3:47 to go. Harriman made two clutch saves in the final two minutes, enabling Nichols to net the game-winner.

The Flames struggled on faceoffs throughout the contest, but managed to overcome that disadvantage.

"We just tell them that it comes down to heart and hustle … and who wants it more, so it's a gut-check thing," McQuillan said. "These are great character-building games, great games to be a part of, especially being on the winning side."

Liberty will next host Minnesota in its annual "Midnight Mayhem" matchup, Friday at 11:59 p.m. 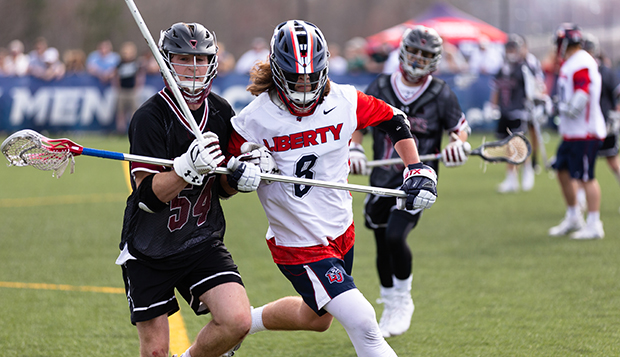