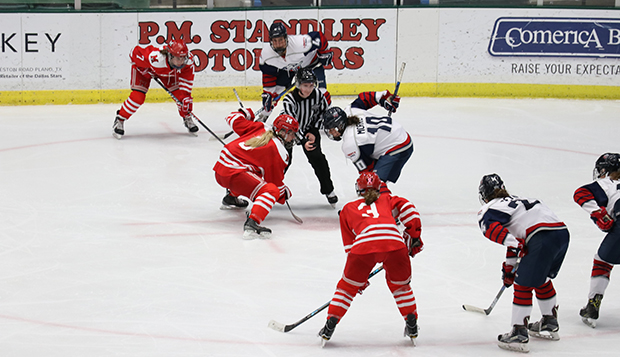 Miami and Liberty have won the past five national titles, with Liberty topping the RedHawks in the 2015 final for their first crown.

"Our girls played really good hockey," Liberty Head Coach Chris Lowes said on Saturday. "Our first period was one of the best we've played when we held them to two shots and controlled play. Our intensity level was high, we looked fresh and fast, and our execution was good."

Assistant captain Vanessa DeMerchant set up the Lady Flames' first goal with 14:16 left in the first period. She skated up the left wing and behind the net before sending a pass from along the boards back to fellow junior forward Aly Morris for a one-timed finish past Miami goalie Ripley Crosley.

Liberty (27-1-3, ranked No. 1 in ACHA DI) doubled its lead to 2-0 at the 10:21 mark when junior forward Alexis Smibert tipped in junior defenseman Emily John's shot from the top of the right circle.

Sophomore forward Shelby Bradford extended Liberty's lead to 3-0 with 16:47 left in the second period. She scored on a backhand in the right crease off a crossing pass from DeMerchant, who had gathered the rebound of graduate defenseman C.J. Tipping's shot from the right point off the backboards.

With the RedHawks (15-8-4) on one of their six power plays, defenseman Christiana von Auloch ended Lady Flames junior goalie Nadia Rupoli's shutout bid with a shot from the top of the left circle that squirted through her glove with 17:53 remaining in regulation.

Seconds after Miami killed off a penalty, Liberty junior forward Rachel Gibson controlled a rebound of sophomore defenseman Kristi Serafin's shot from the top of the left circle and ripped a wrist shot from the slot off the left post and into the back of the net for a 4-1 lead with 8:11 to play.

"Overall, we're really happy," Lowes said after the Lady Flames outshot Miami, 36-21. "We struggled staying out of the box, but did enough to survive that and move on."

Lowes added that Rupoli faced the majority of her shots on the power play. "She did a great job of managing the game for us."

Lindenwood-Belleville, seeded third, will be playing its fifth game in as many days after winning Friday's quarterfinal tie-breaker against Grand Valley State, 3-2 in overtime, and upsetting second-seeded Adrian College, 4-2 in Saturday's first semifinal. The Lynx advanced to the finals in their first-ever Final Four appearance.

"They've played some tough games to get to the final," Lowes said. "We played better today than in our two games against Midland and have shown an upward trend in energy and we hope our conditioning will be a positive factor. Their adrenaline will be a big thing, too, as they'll be amped up and excited."

"We haven't played them in a long time and we are both different teams now," Lowes said. "They're a scrappy and tough team and they've got some skill. They deserve to be where they're at. It's going to be a really fun, tough game that could come down to one or two chances or breakdowns."

"Both teams are great, both goaltenders, defense and offense," Rupoli added. "It's going to come down to who wants it more."

The game will be webcast live on the ACHA YouTube channel.