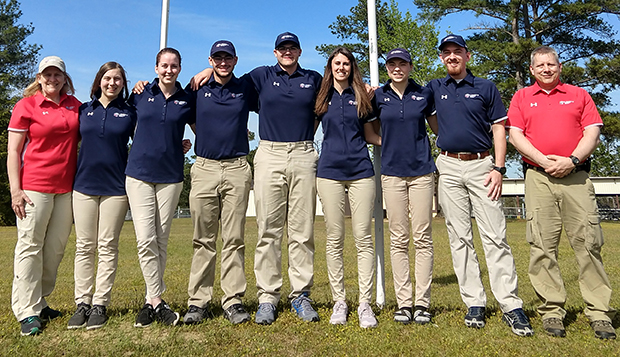 Feaga's aggregate score for the two events put him in second place overall with 1,142 points. Factoring in his scores from the Feb. 9 Sectional Championships in Charlottesville, Va., he was selected to both the Small Bore and Air Rifle All-Star First Teams.

Overall, Liberty improved its NRA Sectional team score — which qualified it as one of 10 schools from around the country to compete in Georgia — by 51 points to 2,056.

Feaga scored 578 points to finish third in the Air Rifle individual standings followed by Krupp (556), Deane (540), senior Rachel Brinkley (536), and Gray (518), with Trennepohl (556) and Duran (525) shooting strong scores as individuals. As a team, they improved their sectional score by 22 points to 2,210, placing sixth overall with Akron winning both competitions.

"We are particularly happy with the improvement made from our sectional performance," Marlene Gray said. "To have an individual champion in our first year competing was pretty awesome."

Feaga will next represent Liberty at the USA Shooting Junior Olympic Rifle/Pistol National Championships from April 5-12 at the Olympic Shooting Center in Colorado Springs, Colo.

The Houston Safari Club Foundation, which seeks to preserve the sport of hunting, helped underwrite Liberty's expenses for 12 team members to compete in this week's ISO and ACUI Collegiate Shotgun National Championships in San Antonio.