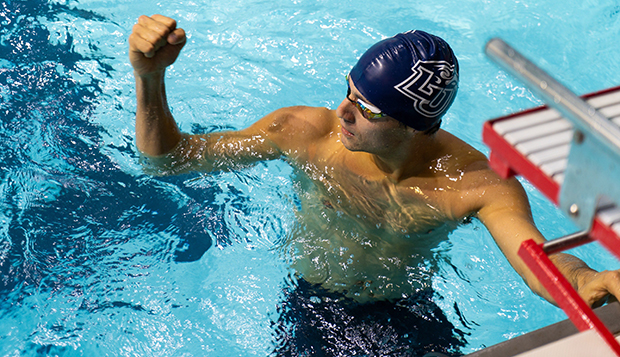 "Ohio State has a really fast pool and a great facility, so it's exciting for the guys to go up there," Flames first-year Head Coach Heath Grishaw said. "They kind of got a taste for it at Eastern Regionals at Rutgers (on Nov. 4) and they are ready to go and hungry for this coming weekend. We are excited to see what is to come."

In its first season as a program last year, the Flames' 11 swimmers and three divers combined for a 13th-place finish at the inaugural College Club Swimming & Diving National Championships hosted by Georgia Tech in Atlanta. This year, the swimming and diving competitions are separate, with the Flames planning to send three divers to next weekend's national event in Boulder, Colo.

Swimmers can enter as many as four individual events and any number of relays at nationals.

The top 16 individual swimmers and relay teams from Friday's and Saturday's preliminary heats will advance to compete in Saturday's and Sunday's finals, with the top eight seeded in the A finals.

Junior freestyler Charles Fernandez, who placed at nationals last year, will not be available for the meet at Ohio State as he is training in Ireland for the first of five world championships in modern pentathlon. In late July, he will represent Guatemala at the Pan Am Games in Peru, where he will attempt to qualify for the 2020 Summer Olympics in Tokyo.