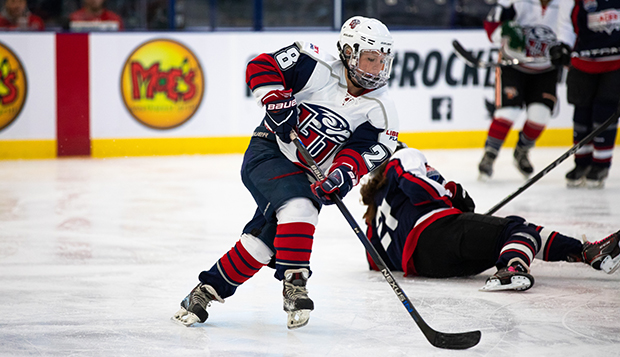 "Last year, Buffalo was the team that bumped us out of the CHE playoffs and beat us again in our pool at nationals, so it was good to beat them," Lady Flames Head Coach Rena Leone said.

The Lady Flames' only losses this season came against Bishops (Ontario) University (11-3) — the top-ranked team in the East Region which beat Liberty twice — and fifth-ranked Mercyhurst (18-4), which received the CHE's autobid to nationals.

On Saturday, Liberty opened a 1-0 lead on the Bulls 10 minutes into the first period when freshman forward Paige Arnosti scored off an assist from Kelenic. Buffalo (16-2-1) answered to tie the game two and a half minutes later before seizing a 2-1 lead with 1:52 left in the second period.

In Sunday's championship game, the Blue Hens (17-5-1) scored first just 1:17 after the opening faceoff before Kelenic responded to tie it up precisely four minutes later.

Kelenic scored the go-ahead goal at the 7:27 mark of the period, tipping in Greenwood's shot, before completing her hat trick on a putback with 9:32 left in the second period off assists from Rice and Greenwood.

Junior forward Shelby Burden stretched the Lady Flames' lead to 4-1 by finishing through the five-hole off assists from senior forward Kaitlyn Langabeer and Greenwood with 6:44 to go in the second. Greenwood capped the scoring 1:20 into the third off assists from freshman forward Maddie Niederer and Kelenic. The Lady Flames outshot the Blue Hens, 54-14, for the game and goalie Kelly Hutton, one of seven seniors on the 17-player roster, made 13 saves to preserve the victory.

"It was a good team effort and they were all playing for each other," Leone said. "It was a great way to end the season."