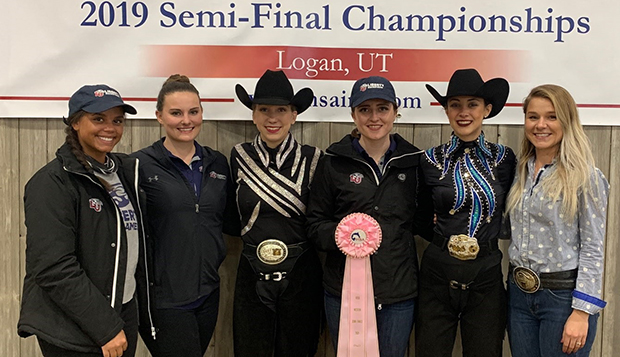 Four members of Liberty University's Western equestrian team competed at the IHSA Semi-Finals in Logan, Utah, over the weekend, with junior Brianna Bass finishing fifth in the Novice Horsemanship class. She missed qualifying for the May 2-5 IHSA National Championships by one place.

Bass was one of Liberty's three finalists at the event, hosted by Utah State University. Seniors Erin Mays and Megan Brandt made the finals in Advanced Horsemanship. Mays became Liberty's first national championship qualifier last season; Liberty did not qualify any riders for nationals this year.

Though senior Amber Dixon did not reach the finals, Western Head Coach Madeline Shrode said she "had a very strong ride on the horse that she drew."

"Overall it was a good weekend, being able to have riders qualify and be competitive was a great accomplishment," Shrode said. "We learned a lot that will certainly be applied to next year's competitions."