Flames quest for ESCHL three-peat denied by Orange in OT 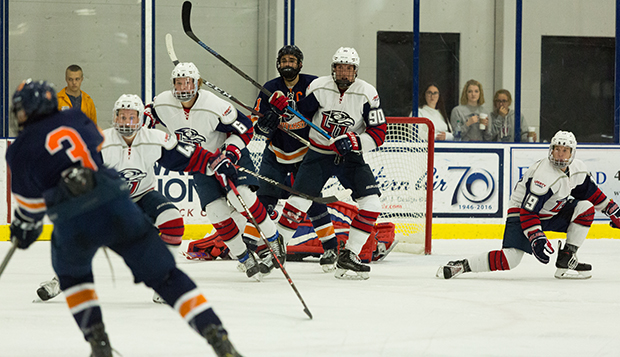 The Orange (21-10-5) won its seventh game in a row, all but one decided in overtime, to capture its first ESCHL Tournament championship in its second year in the league.

In the ESCHL semifinals on Saturday, the Flames rallied from a 2-0 deficit to beat Delaware, 3-2, and third-seeded Syracuse knocked off second-seeded Stony Brook.

On Sunday, Liberty outshot the Orange 75-55 and both teams finished a perfect five-for-five on the PK.

"That may be the longest game I've been involved with," Flames 19th-year Head Coach Kirk Handy said. "We had our chances. There are not too many games you put up 75 shots and lose. We'll learn from this and be better. We've got a few areas of our game we want to refine to make sure we're ready for the first game at nationals." Liberty (25-6-4) qualified for the March 21-26 ACHA Division I National Championships in Frisco, Texas, by clinching its second ESCHL regular-season title.

With 6:54 left in the second period, the Orange tied it up after a faceoff in the right circle when Joseph Pucciarelli slipped a sharp-angled putback from the right side off the glove of Flames senior Josh Halpenny into the net.

At the 18:17 mark of the third period, Flames sophomore forward Jordan Bochinski stole the puck deep in Syracuse's defensive zone and skated between two defensemen before slicing across the crease and lifting an off-balance fadeaway wrist shot into the top left corner of the net for a 2-1 advantage.

However, after the Orange killed off a Liberty power play with 45 seconds remaining in regulation and pulled Cuozzo to give it a man advantage, Matt Jacobs — who scored the game-winner in overtime on Oct. 12 at the LaHaye Ice Center — netted the equalizer. Syracuse defenseman Stephen Bresse skated the puck behind the cage and spotted Jacobs who finished through the five hole from point-blank range with 23.5 seconds to go.

In the first 20-minute sudden-death overtime period, Liberty had a few near misses, with sophomore forward Devin Pierce drawing a hooking penalty on a dangerous drive through the right crease before lifting a shot just over the crossbar. Syracuse, which scored three shorthanded goals in the tournament, nearly got another before the Flames regained possession and sophomore forward Cole Gammer and junior defenseman Garrett Nelson put high-percentage shots on goal from the slot.

Cuozzo held Liberty scoreless on the power play for the final minute and a half of the first overtime.

Thompson and Fricks had quality scoring chances in the second overtime — Thompson's on a three-on-one break, before junior forward Quinn Ryan's snipe from the outside edge of the left circle glanced off the crossbar with 4:20 left. Syracuse capitalized on a turnover deep in the Flames' defensive end 25 seconds later when Owen Herrington skated the puck behind the cage and sent a short feed to Connor McNamara who one-timed it top-shelf.

Liberty will return to Lynchburg early Monday morning before leaving for Texas on Wednesday to get set for Saturday's 8:30 p.m. (CST) ACHA DI tournament opener against ninth-seeded Arizona.

"We have a couple days at home and then we're gone," Handy said. "This tournament was good preparation for us. We understand that in those one-goal playoff games, not necessarily does the best team win. Hats off to Syracuse. They were able to win the trophy. I'm proud of our guys who played well all year to get to play in the finals and worked hard tonight, but weren't able to get rewarded for it."