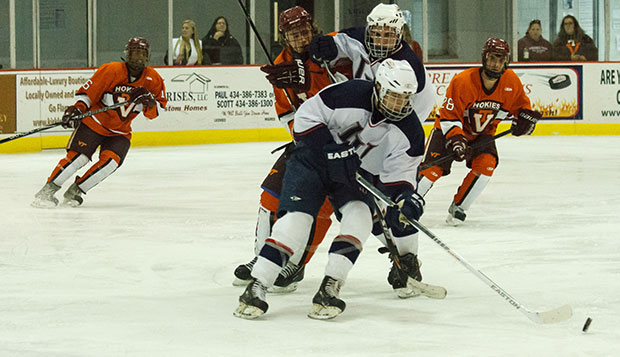 Rivalries often bring out the best and worst in players, as was the case in Sunday's rubber match between Liberty University's and Virginia Tech's Division II men's hockey teams. In the end, the Flames came away with a heated 5-3 triumph to continue their torrid play of late, sweeping three games in the weekend DII showcase at the LaHaye Ice Center to end their regular-season on an 8-1 surge.

Virginia Tech took a 2-1 lead after the first period, with its two goals involving a bit of luck and treachery. The Hokies' ended a scoreless tie with 6:13 to play when senior defender Philip Beethoven-Wilson's shot from the left blue line squirted through the pads of Liberty goalie Nick Devine and trickled across the goal line.

The Flames tied it up less than a minute and a half later when Peter Kazmierczak's shot from the top of the right circle was blocked by Virginia Tech goalie Walker Detweiler, who lost control of the puck with his stick. Jeff Boschman controlled the rebound with his skates, kicking the puck into position to stick it past Detweiler into the right side of the cage.

Then, with 1:55 left in the first period, the Hokies reclaimed the lead after defenseman Alec Burgman got away with yanking Liberty goalie Nick Devine down on a run through the crease, leaving him on his back like a turtle on its shell. Junior forward Greg Kubrak nearly sneaked the puck in on one of two putbacks from the left side of the net before it bounced out to Chris Vu, who ripped a slap shot from the top of the right circle into the empty upper netting over Devine, still flat on his back with his skates in the net.

"I saw the replay and (Burgman's) stick got tied up and he kind of clotheslined him," Liberty head coach Chris Lowes said. "We argued that it's still his responsibility to stay clear of our goalie and I would have thought they would have erred on the side of protecting our goalie, but it happens. It's a quick play and the refs like everyone else, they only get a quick flash. They're not privy to replays."

It didn't take long for the emotionally charged Flames to even the score, just 1:40 into the second period, when John Cotton finished a feed from DJ Dinnison behind the left side of the net with a point-blank shot into the right side of the net.

"The boys bounced back," Lowes said. "It's easy to get a little rattled when something like that happens. We get a bad break but we came back out in the second and just battled hard.

"We're real strong deep in their corners, we've got a lot of ability playing in the goal line and that was what happened on that play," he added of Cotton's tying goal assisted by Dinnison. "It was just a great give-and-go."

With the game tied at 2-2 midway through the second period, Virginia Tech killed a five-minute power play, keeping the game in the balance.

"Power play was probably the only thing that we really were disappointed in tonight," Lowes said. "We struggled to get shots through and make things happen, but give Virginia Tech credit for their penalty kill."

The extended man advantage occurred after a dangerous roughing penalty was called on Tech freshman Jake Hubert for checking Liberty's Nate Arbour into the boards, briefly knocking the freshman forward unconscious. The hit appeared to be payback for Kyle Davis checking Vu from behind into the boards on the other end, which went un-penalized.

"It was just a physical game all around," Lowes said. "The goalie's getting banged, bodies were flying and it always is when we play Virginia Tech."

Caleb Allison put the Flames ahead to stay less than two minutes into third period on a goal set up by Boschman and Seth Reed. He skated in from the right corner and threaded a shot through the legs of Detweiler that barely skidded across the goal line for a 3-2 edge. Then, less than three minutes later, Liberty extended its lead to 4-2 when Kazmierczak pocketed a left-handed slap shot from the center of the left circle into the net, finishing the rebound of shots by Bobby Cervone and Brad Docksteader.

"That was a nice finish," Lowes said. "Kaz has been hot lately, playing well."

But the Hokies showed they had plenty of competitive fight left in them, slashing the deficit to 4-3 with just under 5:00 left in regulation. Douglas McDonald skated through Flames defenders and had his initial shot saved by Devine before senior defender Joel Samuels put away a follow by Burgman seconds later.

Liberty capitalized with its only power-play goal of the day for a bit of breathing room with 3:24 to go when Dinnison received a cross-ice assist from Neal Henderson, skated in from the left wing, drew a defender out of position and finished a shot past Detweiler.

"I just tried to get by the defender and then bury the puck," Dinnison said. "(Henderson) was on the wing, he passed it across to me with a lot of speed (and) I kind of just took it in wide, saw the defenseman bite a little bit, deked him to the right and then got by him one-on-one with the goalie and scored."

"That's just DJ being dangerous on the rush," Lowes added. "They were battling and they had a little momentum there and were spending some time in our end, so we got the benefit of the power play and DJ did his thing."

Virginia Tech, ranked fifth in the latest ACHA DII poll, outshot sixth-ranked Liberty, 36-35, but the Flames (20-7-1) won the regular-season series against the Hokies (14-11-2) two games to one, setting up a fourth meeting in the first round of the Mid-Atlantic Conference tournament, Feb. 15 in Abingdon, Md.

"It felt good to get that one, just for the seniors (since) it was their last game here," said Dinnison, Liberty's second-leading scorer behind Docksteader. "It was huge to get a W against our rivals (and) I was glad to help.

"We had a really good weekend," he added. "Three big Ws, should get a good ranking spot (for the DII Southeast Regional playoffs Feb. 22-24). It's all about momentum in hockey. We're playing really confident right now and we're hoping to just take that into the playoffs and do really well."