Flames to tune up for nationals defense in Chesapeake 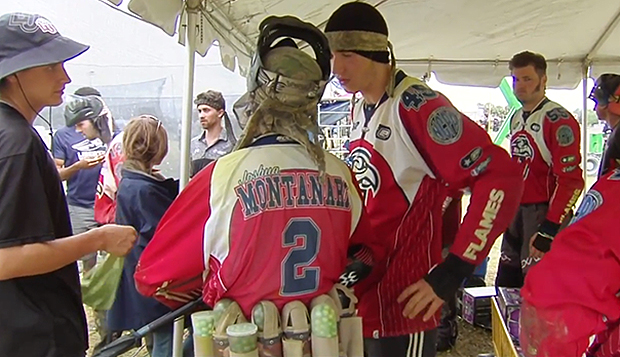 Junior Josh Montanari is one of three returning starters on the Flames' gold line that won the 2018 Class A national title.

"It will be a different style of play than we are used to facing in collegiate paintball but it will definitely be challenging," Flames Head Coach Brian Davidson said. "There were not enough collegiate teams to build a conference this year, but we were able to go to one Northeast Conference tournament last semester at MIT."

This will be Liberty's last competition in preparation for the April 12-14 (NCPA) national championships in Kissimmee, Fla.

"The tournament will be a good a test of our skills and practice to see where we're at and what we need to work on in our last week and a half before nationals," Davidson said.

While they haven't traveled to or hosted as many tournaments as in previous seasons, the Flames have not been idle in the five months since their last competition in Massachusetts in early October.

"We have hosted scrimmages against NC State and Tennessee and we've been grinding every weekend," Davidson said. "We've been working with a Club Sports physical trainer at getting in shape for the hot, humid conditions we can expect at nationals, pushing ourselves cardio-wise to make sure our fitness levels are as high as we can get them."

Senior Kyle Babb and graduate Brent Jones returned after taking the fall semester off, and Liberty also added freshman David Lopes for the spring semester. The Flames now feature three of their five starters from last year's national championship lineup and a total of seven players with experience at nationals, including seniors Zach Moore and Corbin Ryan and juniors Josh Montanari and Austin Larson.

"Our goal is to become the first team to win back-to-back national championships in the Class A Division of paintball," Davidson said. "We have a really strong top line and we're excited to see how things pan out. I'm very optimistic. It will be just as challenging if not more so than last year so we'll definitely have to be on our A game."