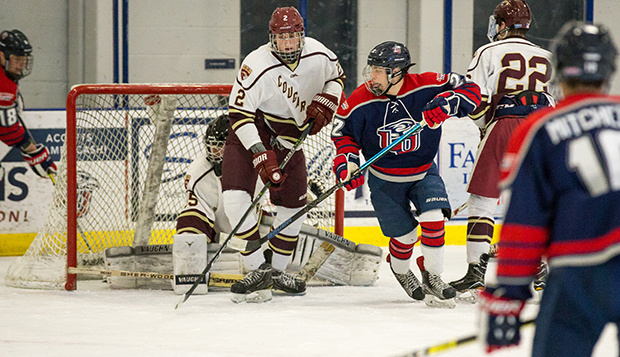 "We're really excited," Flames Head Coach Jared Smith said. Liberty is seeded eighth in its third South Region playoff appearance as a program. "Ole Miss will be a good test for us. They're having a really good year. The guys are pumped about it."

"Regionals is so open just because it's single elimination and pretty unpredictable," Smith said. "You don't have to be the best team, you've just got to play two good games. Anyone can win on any given day."

The tournament will be reseeded after the first round, with the two second-round winners advancing to the March 26-30 ACHA DIII National Championships in Frisco, Texas.

The Flames sent sophomore defenseman Alex Norwinski up to the DII team for the postseason, but should have two others, freshmen JD George and Maxx Mitchell, back from injury to anchor the defense in front of their three-goalie rotation of senior Derek Guzik, junior Clayton Pierce, and sophomore Micah Hauke.

"We've tried to keep lines as consistent as possible because they have a lot of chemistry by now," Jared Smith said. "Our seniors are guys who have gone to the regional playoffs before so we are leaning on them and their experience. The key will be putting our nerves aside and playing a good style of hockey with discipline. Every minute of every shift matters."