Flames rise to No. 8, set to face No. 9 Arizona at DI nationals 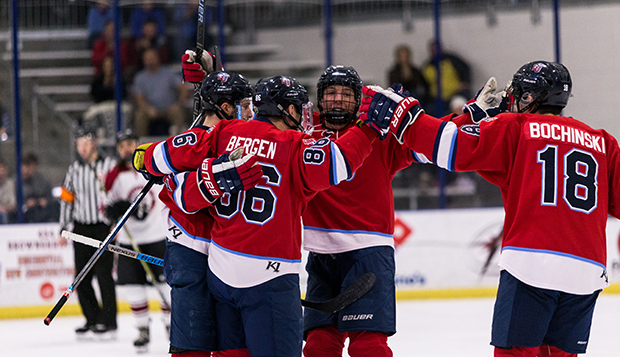 By sweeping No. 20 Alabama last weekend in its regular-season-ending series at the LaHaye Ice Center, Liberty University's ACHA Division I men's hockey team moved up two spots to No. 8 in this week's ACHA DI national ranking.

"We worked hard all season to be in the top 10 and we're happy to get ready to go to the tournament at No. 8," Flames Head Coach Kirk Handy said. "We're looking forward to it."

First, the Flames will travel to West Chester, Pa., to try to win their third consecutive ESCHL Tournament title since joining the league in 2016, from March 15-17.

"That has been a goal of ours all year and we are focused on that," Handy said.

Liberty, seeded No. 1, received a first-round bye and will open with a 5 p.m. semifinal on Saturday, March 16, against the lowest seed after Friday's first-round matchups between No. 3 Syracuse and No. 6 New York University at 1 p.m. and No. 4 Rhode Island and No. 5 Delaware at 3:30 p.m.

The Flames earned their second autobid to nationals by defending their regular-season title with a Feb. 15-16 conference-season-ending sweep of Delaware. Liberty won the 2017 and 2018 ESCHL playoffs by dethroning four-time defending champion Stony Brook, the only other ESCHL team selected to this year's ACHA DI national championship field in Texas.

At nationals, the Seawolves, seeded 12th, will challenge No. 5 Iowa State in their first game before No. 6 Minot State faces No. 11 Illinois and No. 7 Davenport plays No. 10 Central Oklahoma.

No. 1 Lindenwood, No. 2 Michigan-Dearborn, No. 3 defending national champion Adrian, and No. 4 Ohio will face the winners of the four first-round games between the 13th- through the 20th-seeded teams on Friday, March 22. The quarterfinals, semifinals, and championship rounds are set for March 24-26.