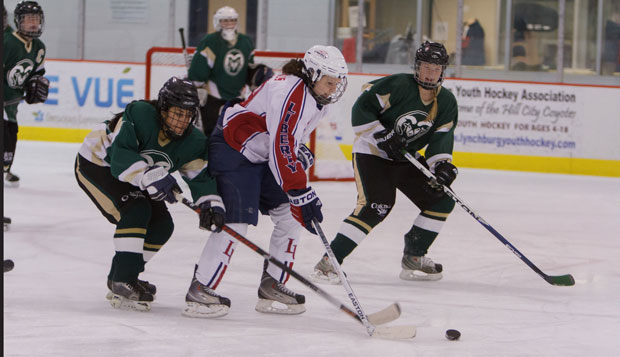 Liberty University's Division I women's hockey team, which received all but three first-place votes to remain atop this week's third ACHA DI women's poll, completed an overwhelming three-game sweep of 11th-ranked Colorado State with an 8-1 victory, Saturday night at the LaHaye Ice Center.

The Lady Flames (21-2) found the net 78 seconds after the opening faceoff when Carrie Jickling, who later capped the scoring, converted an unassisted shot deep in the crease off a power play. They added a second goal with 75 seconds left in the first period when Laura Del Monte skated through the left circle and lifted a wrist shot top shelf past CSU goalie Amanda Vandenberg before being leveled by Rams defender Kelly French.

Top scorer Stacey McCombe added two second-period goals, with Amanda Grainger credited with a secondary assist on both and Del Monte and Autumn Kucharczyk distributing the primary assists. Forty seconds before the second intermission, Jenny MacArthur converted off a cross-ice assist from Del Monte after she made a steal and turned the puck up ice near the Rams' blue line.

Sophomore forward Nikki McCombe, Stacey's sister-in-law, scored off an assist from Keeley Beisinger with 7:24 left in third-period before setting up Carly Peleshok on a follow of Kucharcyzk's slapshot from the top of the left circle for a 7-1 advantage.

"One of the key players tonight, she doesn't get many goals, but Nikki McCombe does a great job," Lady Flames head coach Paul Bloomfield said. "She works hard. She plays on our grinder line and that line's not really a scoring line, it's more (designed to) wear down the opponent. She plays without a lot of reward for all of her hard work. It's good to see when she gets the odd goal because she works so hard for them."

On the night, Liberty outshot CSU 48-12 with Samantha Rupp recording 11 saves in goal for the Lady Flames.  It was the third 8-1 score involving Liberty teams on the day after the DII men defeated Rowan and the DI men lost at Delaware by the same count.

"We actually took less shots, but we got them in the net tonight which is what we weren't doing last night," Bloomfield said. "I felt the girls did well tonight and worked well together. Other than a five- to eight-minute (span) in the second period, they moved the puck well."

The Rams prevented Liberty from shutting them out for a third straight time six minutes into the second period when Alexandra Kuhn picked off the puck near the center line and put away a one-on-one breakaway with Rupp by flicking a backhanded wrist shot past her into the upper left netting.

"We had a turnover on the blue line and the girl took the opportunity," Bloomfield said. "It was a really nice goal. It was good to see her get it. They came a long ways just to get one goal."

CSU (6-6) actually has had to travel to play all but two of its games this year and coach B. Alan Brown said Liberty is the only team other than Colorado and Michigan that has visited the Rams in his three seasons at the helm of the fourth-year program.

Liberty concludes ACHA regular-season play with the sweep of CSU before traveling to face a women's team from Raleigh, N.C., next Saturday and Sunday. The Lady Flames expect to be the No. 1 seed when they make their fifth ACHA Division I national tournament in seven seasons March 7-10 in the Ashburn (Va.) Ice House.