Synchronized skaters off to Michigan for U.S. championships 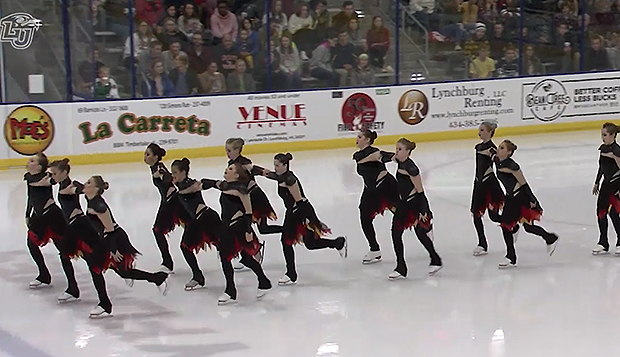 Liberty University's synchronized skating team will make its second appearance in the Collegiate Division of the United States Synchronized Skating Championships, set for Thursday through Saturday at the USA Hockey Arena in Plymouth, Mich.

"Going to nationals is obviously huge for us and great for our program in helping to recruit," Lady Flames Head Coach Tatiana Payne said. "We are really looking forward to get that exposure and excited to go back for a second trip there and to show just how much we have grown as a program in just one year."

Since finishing fifth in the Feb. 1-2 Eastern Sectional Synchronized Skating Championships in Worchester, Mass., Liberty has made some revisions to its "Hunger Games" themed program.

"We want to maximize our points and get our technical score higher at nationals," Payne said. "We are really excited to get see a big payoff. There were a few teams out there last year that we were neck-and-neck with and we are hoping this takes us above them this year."

The skaters are eager to showcase their talents and to make a positive impression on the judges, spectators, and potential Lady Flames recruits competing at nationals in younger age divisions.

"Figure skating is unique in that we only have two or three minutes to prove ourselves on the ice and they don't get to see all the changes and behind-the-scenes work that we put into it," Liberty senior Emma Henderson said. "As hard as they are and as big an adjustment as they are, they're for the benefit of the program, so whatever we can do to get those points..."