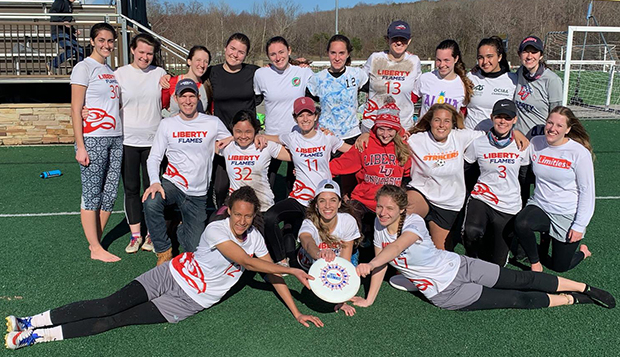 Liberty University's women's Ultimate team finished 4-2 in Saturday's and Sunday's Commonwealth Cup at the Smith River Sports Complex in Axton, Va., to hold its 12th seed out of the 26 teams in Tier II.

The 36-team tournament is one of the biggest on the East Coast, with the top 10 competing in Tier I.

In Saturday's pool play, held in cold and rainy conditions, the Lady Flames defeated Drexel, 13-7, before playing even with Brown, the 10th-seeded team in Tier II, for the first half. However, the Bears switched up their defense from man-to-man to zone and their offense took control, winning the last seven points for a 10-4 comeback victory.

Liberty defeated Virginia's B team, 10-3, and edged George Mason by one point in a back-and-forth game to finish 3-1 in pool play.

"At end of the day, we were pretty happy with how we performed," Lady Flames Head Coach Jonathan Mast said.

Sunday's playoffs took place in much more favorable weather conditions. Liberty implemented a new offense developed specifically for its first-round matchup against Duke, a team that had won matchups decisively in fall and spring tournaments.

"We forced them to adjust what defense they were running on us and we held point for point with them for much of the first half before they went up 8-6, when they capped it," Mast said. "Duke came out in the second half with a different defense and scored the only two points to beat us, 10-6."

The Lady Flames then beat Catholic University of America, 12-6, in the final round of playoffs.

"It was nice to finish on a win and a really encouraging day," Mast said. "We are getting better every tournament and overall, it was a good experience for us and helped us grow a lot."

Senior Victoria Dissmore was a defensive stalwart for Liberty, recording five defensive knockdowns in the game against Duke and 12 for the tournament. Senior captain McKenzie Ross anchored the offense with four assists against Catholic and 12 for the weekend, and senior cutter Charis Jantomaso had nine goals in the six games to lead all scorers.

The Lady Flames will return to Axton, Va., for their next tournament, the I-85 Rodeo, on March 31.