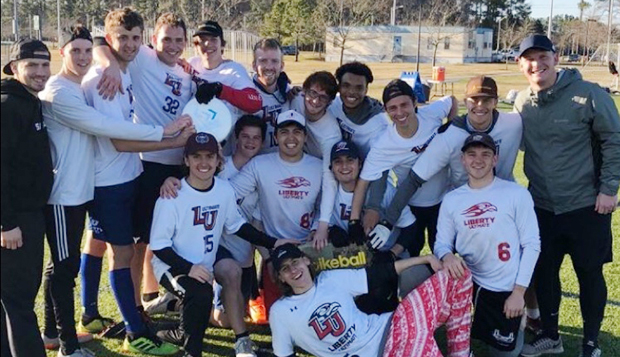 "We only went with 15 guys, which is small for an ultimate team, but a lot of our older guys stepped up and contributed a ton to our success," Flames Assistant Coach Brendan Kinne said.

Most of the teams in the field ranged between 50th and 150th in the USA Ultimate Division I rankings, with Liberty debuting at No. 185 after its spring season-opening 17th-place showing at the Mid-Atlantic Warmup.

The Flames swept all four of their games in Saturday's pool play — routing American, 13-2, before rallying from a 7-3 halftime deficit to upset top-seeded Rutgers, 10-9. Liberty then nipped UNC Chapel Hill's eighth-seeded B team, 11-10, and dominated 16th-seeded Wake Forest, 15-1.

In Sunday's quarterfinals, Liberty defeated seventh-seeded Drexel, 15-10, before edging No. 4 RIT, 11-10 in the semifinals and No. 3 Brandeis (Mass.) University, 10-9 in the championship match.

"Defense was key against Rutgers," Kinne said. "Because of the wind, we would punt and play defense and we forced a lot of turnovers close to their end zone that we turned into quick scores. Then, on Sunday, we started to pair that defense with really good offense."

Liberty will return to Virginia Beach for its next tournament, the Atlantic Coast Open set for March 30-31. The Flames will then host the 10-school Virginia Conference Tournament, April 13-14 at the Liberty Intramural Complex, with the top four or five teams qualifying for East Coast regionals.