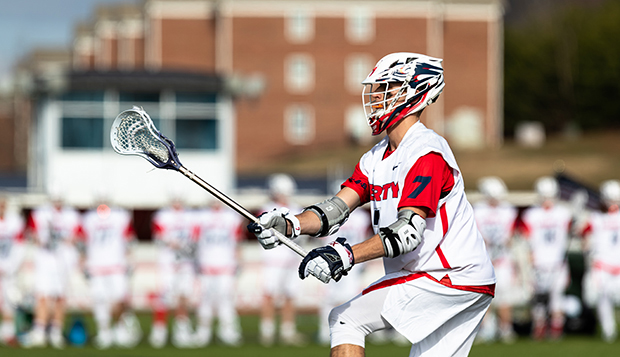 "We were pleased with the way the guys played on both sides of the ball, defensively and offensively," Liberty Head Coach Kyle McQuillan said. "Our defense applied a very aggressive ride and forced turnovers in transition while our offense was patient, took good, high-percentage shots, and stayed to our game."

Senior attack Sam Gregory, who paced the Flames' offense with four goals, started the scoring just over a minute after the opening faceoff with a quick dodge and shot from the center of the box.

"Sam was definitely our most dangerous attackman on the field today," McQuillan said. "He was able to get inside and to dodge from the wings and distribute, too."

After a defensive stop, junior midfielder Derrick Esh took a short pass from junior attack Noah Rude and rifled in a running shot from the right side for a 2-0 lead at the 12:28 mark before adding a turnaround score in the middle for a 3-0 advantage with 9:19 left in the first quarter.

After the Tigers scored three straight goals to trim Liberty's lead to 5-4, the Flames padded it to 7-4 just 14 seconds before halftime when Esh cut across the middle and received a feed from junior attack Caleb Britton (1G, 1A) before pivoting and firing in one motion to finish a short-ranged shot.

All six of the Flames' starting attackmen and midfielders scored, including hat tricks from Esh and freshman C.J. Nichols, two goals and one assist from freshman Thomas Pinel, and one goal and three assists from senior midfielder Chase Wright.

The Flames (3-0, ranked sixth in MCLA Division I) remained persistent on defense and consistent on attack in the second half, outscoring Clemson (4-1, ranked 17th) by the same 7-4 margin over the final 30 minutes as they had in the first.

"The second half, we were able to settle things down a little bit and maintained our pace throughout the game," McQuillan said.

Senior goalie Brayden Harriman made six saves, including a couple spectacular stops in the second half.

Liberty rotated in three faceoff specialists who managed to win 11 of 25 restarts. Freshmen Shane Reynolds (4 of 10) and Cole Jankowsky (4 of 11) were replaced by sophomore attack Austin Aguilar in fourth quarter, when he won three of his four tries to help Liberty seal the win.

"They got one goal in the fourth quarter, but we were able to deter the comeback by being able to win the faceoffs and maintain a pretty dominant advantage in time of possession," McQuillan said.

The Flames will return to the Liberty Lacrosse Fields next Saturday for a 4:30 p.m. showdown with Connecticut. The Huskies ended Liberty's 26-game home winning streak with a 9-6 setback on April 2, 2017 and upset the Flames in the final 25 seconds of last year's rematch in Delaware, 7-6.

"UConn is a game we've got circled on our calendar," McQuillan said. "We're looking forward to playing at home before our spring break road trip" at West Virginia on March 9, Davenport on March 11, and top-ranked, defending MCLA national champion Michigan State on March 13.