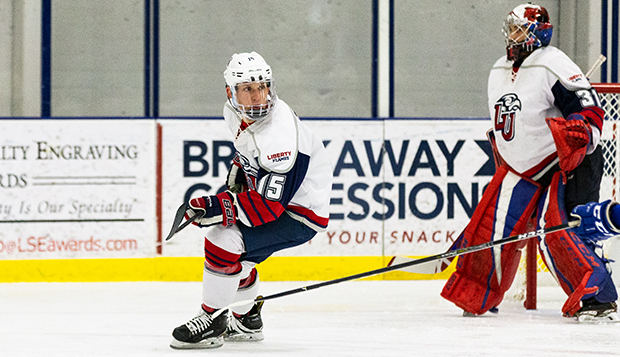 Liberty University's ACHA Division I men's hockey team sputtered on special teams and was shut out for the first time in more than two years in Saturday night's rematch with defending national champion Adrian College at the LaHaye Ice Center, falling by a 4-0 final.

The third-ranked Bulldogs (28-2) picked up right where they left off in Friday night's opener, scoring two power-play goals in a three-minute span midway through the first period.

"We give up two goals on the power-play, we give up a shorthanded goal, we go 0-for-8 on the power play, and it's just not going to get it done," Liberty Head Coach Kirk Handy said. "Five-on-five, we were there, but you give up three goals (on special teams) and it's not a recipe for success."

With 30 seconds left on the Flames' first PK, Jordan Oshowy gave Adrian a 1-0 lead off an assist from fellow defenseman Dante Raposo when his shot from inside the right circle slipped through the five-hole of Flames senior goalie Cole Burack at the 12:30 mark. Oshowy returned the favor, setting up Raposo for a slap shot from the top of the left circle for a 2-0 edge with 9:48 left in the period.

Less than three minutes later, the Bulldogs stretched their lead to 3-0 when defenseman Dan Stone's second shot from the top of the slot got under Burack's blocker.

Even with Liberty on the power play for the final 5:09 of the first period, the Flames were unable to stop the Bulldogs from scoring as forward Mark Fratarcangeli capitalized shorthanded, beating senior goalie Josh Halpenny on a breakaway for a commanding 4-0 advantage with 25 seconds left in the period.

Sophomore forward Sam Carlson, playing in his first game in more than four months, nearly got the Flames on the scoreboard, deflecting an entry pass from junior center Cody Clarke.

The Flames outshot Adrian, 44-26, and Halpenny made 21 saves in relief of Burack.

"Halpenny came in and made some big saves," Handy said.

Liberty had two five-one-three power-play opportunities in that stanza, but was unable to capitalize and cut into the deficit.

"Our struggles centered around our power play and PK tonight and we just didn't get the job done," Handy said. "Our season's not over and we will use this as a learning opportunity, there's no doubt about that. I believe in our power play, I believe in our PK and we're going to reset this week and get ready to go for Alabama."

The Flames wrap up their regular season next Friday and Saturday at home against the Crimson Tide. Liberty will be without junior forward and leading scorer Quinn Ryan, who will compete with Team USA men's hockey in the March 2-12 Winter World University Games in Russia. Ryan will return in time for the Flames to try to three-peat as ESCHL Tournament champions, March 15-17 at West Chester, Pa., and for the team's trip to the ACHA DI National Championships, March 21-26 at the Dr. Pepper Arena in Frisco, Texas. 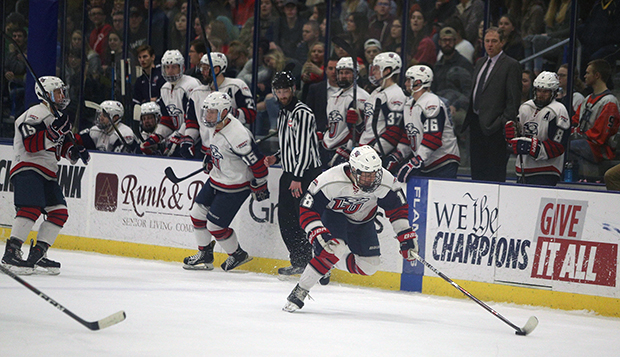