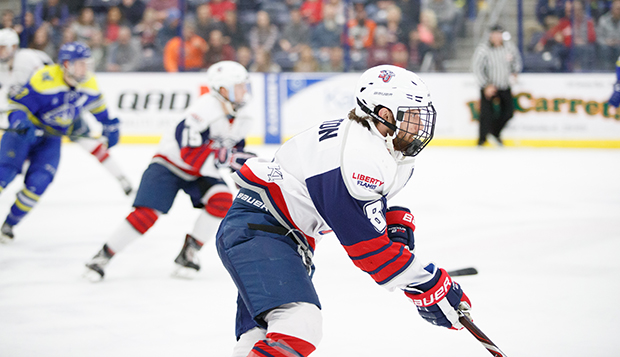 Fueled by a near-capacity College For A Weekend (CFAW) crowd, Liberty University's ACHA Division I men's hockey team seized three leads on No. 3-ranked, defending ACHA DI national champion Adrian College, Friday night at the LaHaye Ice Center, before giving up two power-play goals in a three-minute stretch of the third period for a 5-4 setback.

"There were a lot of positives," Liberty Head Coach Kirk Handy said. "It was a great crowd with a lot of energy in the building and our guys battled hard. The one thing we have to address is that we can't put them on as many power plays as we did tonight. ... I liked our effort for 60 minutes, minus the penalties we took, which were all controllable."

The ninth-ranked Flames (22-5-3) extinguished a five-on-three power-play opportunity early in the first period before Flames junior forward Victor Blomberg cut into the left crease and slammed home senior forward Zak Hayes's crossing pass from near the right post with 1:56 left.

Junior forward Brock Thompson capitalized on a three-on-two fast break 52 seconds later to double the lead to 2-0, receiving a drop-back pass from sophomore forward Devin Pierce and lifting a sharp-angled wrist shot from deep in the left circle top-shelf off the crossbar.

Action went back and forth in the second period, when Adrian (27-2) answered with two goals in a span of 14 seconds to knot the score at 2-2 at the 15:04 mark. Kyle Perkowski struck first, through the five-hole of Liberty senior goalie Cole Burack (31 saves) on a breakaway after taking a short outlet pass from Manny Silverio.

Freshman forward Josh Fricks lifted Liberty back on top, 3-2, just over a minute later, recovering a loose puck in the high slot and deking around Adrian defenseman Mason Vaughan before roofing a short wrist shot over Adrian goalie Michael Barrett from close range.

With 50 seconds left in the second period, the Bulldogs crashed the cage and captain Justin Fisher netted the equalizer on a putback of a point-blank shot by Mark Fratarcangeli saved by Burack.

Fricks converted his second go-ahead goal on a power play with 13:11 left in the third period by flicking in the putback of sophomore forward Jordan Bochinski's point-blank shot from near the left post, set up by junior forward Quinn Ryan's secondary assist from behind the cage.

"He put in two crucial goals tonight," Flames junior defenseman Jacob Fricks said of his younger brother. "He's a tough player. … He can get in there and throw some bodies and at the same time he's got the hands and a good shot."

With 10:16 remaining in regulation, Moore answered for Adrian with a power-play goal of his own, receiving a cross-ice pass from fellow forward Marcus Rose and rifling a slap shot from inside the right circle top-shelf past Burack, retying the game at 4.

Three minutes later, Adrian, which outshot the Flames 36-32, cashed in on another power-play opportunity when leading scorer Joe Costello received a pass from defenseman Jordan Oshowy at the top of the left circle and rocketed a slapshot past Burack to lift the Bulldogs to their first lead with 7:17 to play.

Jacob Fricks had two blasts launched from the high slot blocked and glove-saved in the lower right corner by Barrett down the stretch. "We put a lot of pressure on them at the end," he said. "We were all over them six-on-five (after pulling Burack for the final 1:04). It was a good battle throughout the whole game. I thought we did our best today and we just need to come out (Saturday) and take a few less penalties. … That was the difference in the game today."

Saturday's rematch in Lynchburg will be webcast live by LFSN and carried on ESPN+ with the puck dropping at 7 p.m.

Liberty junior Jacob Fricks skates the puck out of the defensive zone. (Photo by Gabrielle Calhoun)