Cyclists to put rubber to road at ACCC opener this weekend 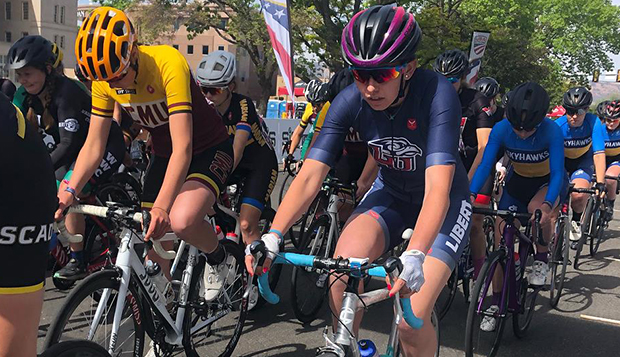 Senior Sarah Parker will race for Liberty in Category A for this weekend's ACCC-opening road and criterium races.

Ten members of Liberty University's men's and women's cycling teams will test their road racing skills this Saturday and Sunday at the 14th annual Tidewater Classic, an Atlantic Coast Cycling Conference (ACCC) spring season opener hosted by the College of William and Mary.

Lady Flames senior Sarah Parker is the only Liberty cyclist competing in Saturday's Category A race, starting at 10:40 a.m., with senior Mattasyn Shisler and junior Heather Ziebart both riding in Category B at 8:40 a.m. For the Flames, Freddy Shashaty, Khoi Tran, and Todd Yoder will enter the Category B races at 1:40 p.m. with graduate Giovanni Bianco and freshman Max Galbraith competing in Category C at 10:35 a.m. and Joe Hamann and Arthur Tanyel starting in the 8:35 a.m. Category D race.

A few of Liberty's cyclists are in the process of applying for upgrades in their classifications.

"They should be commended on their willingness to train and suffer through the cold weather and some pretty brutal interval workouts day after day," Liberty first-year Head Coach Timo Budarz said. "People have been working so hard that several that I wouldn't think last fall would make the team have really impressed me with their sprints and their ability to bounce back."

Apart from how fast they finish, he is equally interested in seeing how his team members interact with other riders on the course and before and after the races.

"A lot of these athletes are people who don't know Christ," Budarz said. "There's a camaraderie and a certain kinship that comes through enduring a race together. You want to win, but you can also be a living testimony side by side with other riders, as you are suffering and competing together. If you strike up a conversation, it opens doors to more meaningful opportunities to be a witness."

Future ACCC races on the spring schedule are set for March 23-24 at Virginia Tech in Blacksburg, Va., March 30-31 at Navy in Annapolis, Md., April 6-7 at Maryland in College Park, Md., April 13-14 at Duke and North Carolina in Durham and Chapel Hill, N.C., and the Conference Championships hosted by Appalachian State in Boone, N.C.