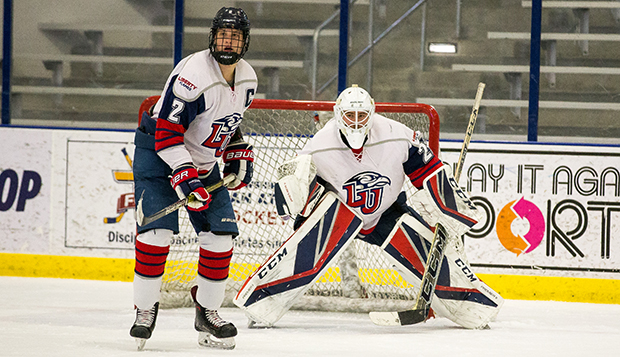 However, after falling in overtime to the Ice Lions in last year's final, the Flames (21-6, ranked third in ACHA DII) let a 2-0 lead slip away in a 4-2 defeat at Delaware's Fred Rust Arena.

"It was really close," Liberty Head Coach Ben Hughes said after the Flames' third narrow loss to second-ranked Penn State (17-4-2) this season. "Adam Partridge (28 saves) played unbelievable in goal. He made a lot of great saves before they got an empty-netter in the final minute."

Flames freshman forward Darren Carter started the scoring just over three and a half minutes into the second period off assists from freshman defenseman Charlie Wilkie and sophomore defenseman Kyle Martin. Sophomore forward Blake Flanders lifted Liberty to a 2-0 advantage with 8:53 left off assists from Carter and freshman center Timothy Doe.

But Penn State tied it up by the end of the period and took its first lead on a power-play goal with 10:54 remaining in regulation before icing the win with the empty-netter in the final 12 seconds.

Liberty dominated Stevenson (6-17) for the third time this season in Friday's opener, outshooting the Mustangs and scoring twice in each period with two goals and one assist from Wilkie, three assists from Carter, and single goals from senior right wing Matthew Perri, freshman defenseman Aaron Partridge, Flanders, and freshman left wing Joseph Nash.

In Saturday's South Division final, Liberty outshot Delaware (23-10) by a 55-51 margin, and freshman goalie Dakota Cyhaniuk made 47 saves to preserve the 7-4 triumph. The Flames opened a 3-0 lead in the first 10 minutes of on goals by Wilkie, senior defenseman Drew Crilly, and Flanders before allowing the Blue Hens to trim the deficit to 3-2 by the end of the period. Carter and freshman forward Devin Melice boosted Liberty's lead back to 5-2 before Delaware got one goal back in the second. Wilkie and Carter sandwiched goals around a Delaware score in the third period.

Wilkie, Carter, and Crilly all made the All-MACH Tournament Team for the Flames, who will host the March 1-3 Southeast Region Tournament at the LaHaye Ice Center. Liberty, seeded third in the 10-team tournament, will open play on Saturday at 8:30 a.m. against the lowest remaining seed following next Friday's first-round matchups — between No. 9 Rowan and No. 12 Louisville and No. 10 Ohio State and No. 11 Virginia.

The Flames must win twice to qualify for their sixth consecutive trip to the March 22-26 ACHA DII National Championships near Dallas.