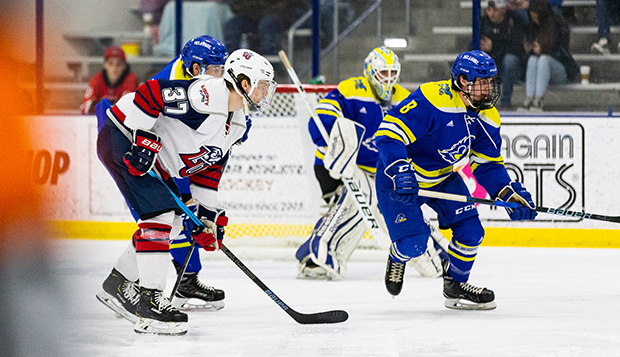 If defense wins championships, Liberty University's ACHA Division I men's hockey team showed it has what it takes to claim its third consecutive ESCHL tournament title (March 15-17 at West Chester, Pa.) and contend for its first ACHA National Championship (March 21-26 near Dallas) by wrapping up ESCHL play with a 4-1 victory in a physical clash with rival Delaware, Saturday night at the LaHaye Ice Center.

"We played really good defensively at the end of the game and didn't give them anything," Liberty junior forward Victor Blomberg said. "Personally, I like physical games and a lot of the boys do, too."

"I liked our defensive game tonight," Liberty Head Coach Kirk Handy said. "There were a lot of gutsy performances tonight by guys who are still pretty banged up and who still played well and gave it all they had. (Halpenny) was solid for us tonight in goal we didn't have as many breakdowns and you could tell we were working hard on our own end."

The Flames, who clinched defense of their ESCHL regular-season title by winning Friday night's opener, 7-5, scored the game's first goal 30 seconds after the opening faceoff.

After junior defenseman Jacob Fricks intercepted the puck, sophomore forwards Devin Pierce and Jordan Bochinski worked it up to Blomberg, whose shot from deep in the left circle trickled through the five hole of Delaware goalie Steven East, prompting fans to toss a menagerie of stuffed animals onto the ice for Gleaning For The World's annual Teddy Bear Brigade offering.

"It's always nice to score the first goal early in the game, to get the boys going," Blomberg said. "It was a perfect play by Pierce and I had an open spot and went for it."

Delaware's Michael Nisky knotted the contest at 1-1 with a one-on-one finish past Halpenny at the 7:58 mark of the first period.

Seconds after a successful penalty kill, Liberty seized a 2-1 lead at the 14:38 mark of the second period when Josh Hamilton skated behind the Blue Hens' net and set up fellow junior forward and captain Brock Thompson for a top-shelf slap shot from inside the left circle.

Less than a minute after the ensuing faceoff, Liberty junior forward Quinn Ryan started a fast break by skating the puck up the middle of the ice before dropping a pass back to junior defenseman Chaydan Lauber in the high slot, where he stretched the advantage to 3-1 by rifling a wrist shot inside the left post with 13:46 left.

With 34 seconds remaining in regulation, Bochinski ended 33 minutes of scoreless action by rocketing a shot from beyond the blue line into the Blue Hens' empty net for the final margin of victory.

"It was a good way to wrap up conference play and now we focus on Adrian," Handy said of Liberty's showdown with the reigning ACHA DI national champions next weekend back at LaHaye. "We've been looking forward to that (series rematch) and we're going to have a good week of practice and be ready to go next Friday night."