LU to close out ESCHL slate this weekend against Blue Hens 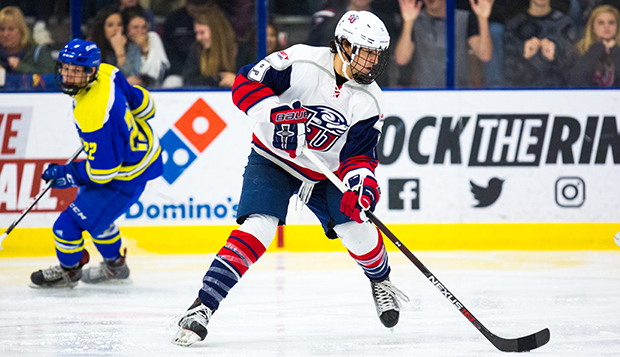 Flames wing Brock Thompson controls the puck in a 2017 showdown with Delaware at the LaHaye Ice Center.

The atmosphere inside the LaHaye Ice Center for this weekend's final ESCHL regular-season showdown between Liberty University's ACHA Division I men's hockey team and Delaware should be especially loud and festive.

Not only can the Flames clinch defense of their ESCHL regular-season title and an autobid to the March 21-26 ACHA DI National Championships near Dallas, but the first 500 fans arriving for Friday night's opener will receive free vuvuzela horns, made popular at South African soccer games, courtesy of Domino's.

Then for Saturday's rematch, tickets will be sold for $2 to fans bringing a new or gently used stuffed animal to be tossed onto the ice immediately after the Flames' first goal, adding to the celebration with the donation to Gleaning For The World's annual Teddy Bear Brigade.

Head Coach Kirk Handy believes his players are fully focused on the objectives at hand and won't be distracted by the bedlam going on around them.

"We're going to be dialed in and ready to go this weekend," he said after the Flames moved up one spot to No. 8 in this week's ACHA DI rankings. "We always have good games against Delaware and any time you are playing a conference game, you want to be sure you're ready to play a full 60 minutes."

Liberty scouting report: After splitting their last series at Rhode Island on Feb 2-3, when the Flames had only 16 players available for both games decided in overtime, the majority of the seven players who sat out due to injuries and suspensions will be available for Friday night's opener.

Junior forward Quinn Ryan, Liberty's second player ever to be selected to represent Team USA at the March 2-12 Winter World University Games in Russia, is the Flames' leading scorer with 24 goals and 28 assists, ranking him ninth in ACHA Division I.

Ryan is complemented by sophomore forward Cole Gammer (16G, 27A) and junior linemate Brock Thompson (16G, 21A). Junior defenseman Garrett Nelson returned from injury and moved back into third on the team with 25 assists.

All-time series: The Flames, who won all five meetings with the Blue Hens last season, swept Delaware by 2-1 and 3-2 scores Oct. 5-6 in Newark, Del. to improve their head-to-head advantage to 21-18-2.

Coaches: Handy is in his 19th season as Liberty's head coach and has compiled an overall record of 426-176-29. Todd Mittlemeier was promoted from assistant to become Delaware's head coach in January and has posted a 4-6 record to date.