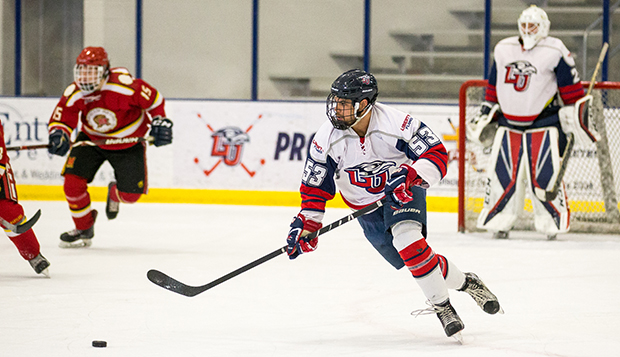 Senior defenseman Drew Crilly skates the puck out of the Flames' zone in a recent game against Maryland at the LaHaye Ice Center. (Photo by Joel Isimeme)

The seedings for the four ACHA Division II men's hockey Regional tournaments (Northeast, Central, Southeast, and West) will be announced Wednesday at 7 p.m. on an ACHA DII Reveal Show produced by the Liberty Flames Sports Network and hosted by Liberty University graduate and LFSN sideline reporter Bhrett Vickery. All but the West Region playoffs (Feb. 28-March 2) are set for March 1-3.

The top two-ranked teams in each region receive autobids to the March 22-26 ACHA DII National Championships near Dallas with the third- through 12th-ranked teams advancing to compete at their respective regional tournaments, which will determine the remaining two national qualifiers.

Liberty's ACHA DII team (19-5) secured the No. 3 seed and will host the Southeast Region playoffs at the LaHaye Ice Center. As the highest ranked team in the tournament, the Flames will face the lowest remaining seed following Friday, March 1, first-round matchups — between No. 9 Rowan and No. 12 Louisville and No. 10 Ohio State and No. 11 Virginia — on Saturday, March 2, at 8:30 a.m.

Other second-round matchups will pit No. 4 Cincinnati against the higher seed advancing from Friday's play-in games, No. 5 Rider against No. 8 North Carolina State, and No. 6 Delaware against No. 7 Miami. The winners advance to the Sunday, March 3 semifinals, with the two finalists securing national berths.

This weekend at the Olympic-sized rink at the Fred Rust Ice Center in Newark, Del., Liberty will begin defense of its Mid-Atlantic Collegiate Hockey (MACH) tournament title. As the No. 1 seed, the Flames will face fourth-seeded Stevenson in Friday's semifinal matchup set for 1:30 p.m. The winner will advance to Saturday's championship game against the winner between second-seeded host Delaware and Maryland. The Flames swept their regular-season series with both Stevenson, which they trounced 11-1 in a Feb. 8 regular-season finale at home, and Maryland, but split their matchups with Delaware.

Liberty features 11 freshmen on this season's squad, but also return nine players from last year's team that qualified for its fifth-consecutive nationals appearance by sweeping Rider and Miami (Ohio).

"We want to make sure that we are playing our best hockey because this is essentially the last weekend we have to learn from our mistakes and capitalize on other opportunities," Flames Head Coach Ben Hughes said. "We want to make sure we are getting better each night and by the end of regionals, want to be at our very best."